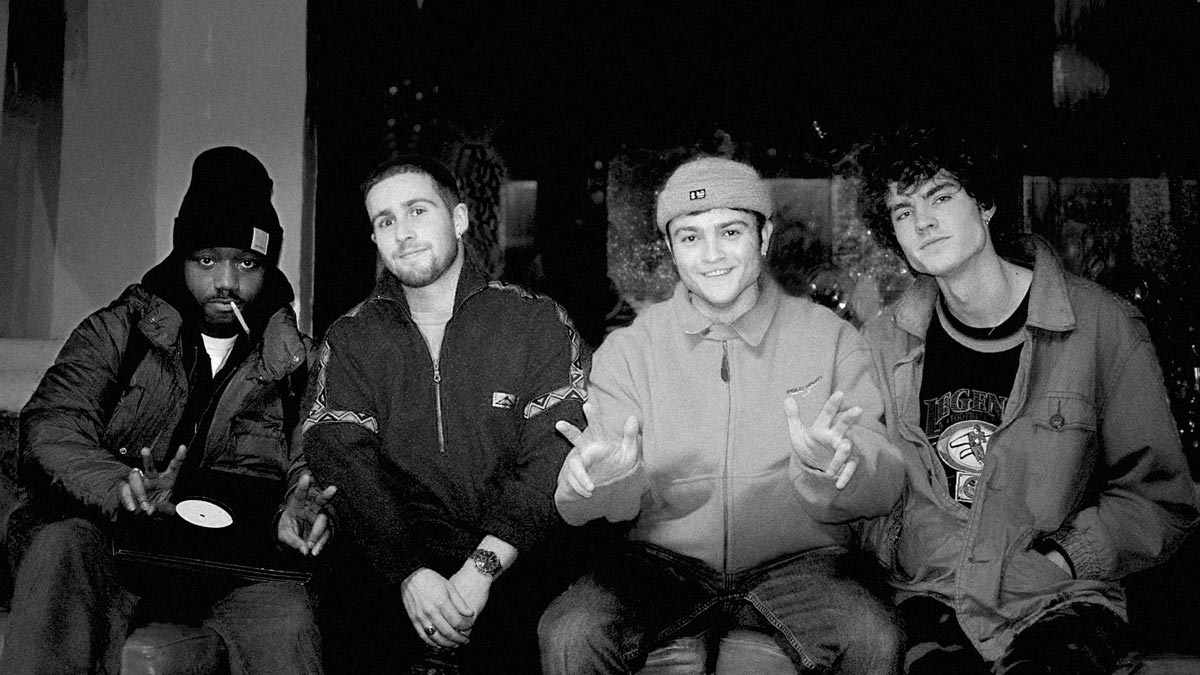 Brighton’s Chunk teamed up with Hip Hop lyricist Lord Apex for their latest single ‘Brink’. I set out to discover more about this unique collaboration and how they hooked up with such an elusive artist.

Joe: From the outset, we wanted to do Hip Hop, and Lord Apex is a rapper I’ve been aware of who is from West London as well. Antonio was the person who suggested getting him on the track.

Antonio: Yeah, Joe showed me Apex’s stuff, and when he came down to Brighton for a gig at Patterns, we went and met him and the whole crew. I told him “we’re a new band making instrumentals and it would be sick to have you on it”, and he seemed interested. So, when we finished the track, we sent it, and he did his thing.

I managed to get the “hard-to-get-ahold-of” Lord Apex on the phone for some insight into the lyrics of ‘Brink’. I questioned his mysteriousness, and as it turns out, he disagrees with his enigmatic status.

Lord Apex: Antonio caught me in the smoking area, and I’m always open to hearing what music people make. I felt like it was the first time I had an opportunity to work with a different sound. So, I was like, lemme show people where my mind is at when it comes to this sound. And on top of that, me and my girl were going through downs and that played a part on what I was rapping about. The beat just gave me this real positive vibe, that sorta sense that shit’s not over yet. We’ve been together for a long time and we kinda just grew apart. I feel bad that I don’t have the same affection I had before, but at the same time, I wanna give her the space to grow as an individual. I just wanted to go for something positive. I think we went through two or three versions because obviously the second part was spoken word shit. Chunk hit me like “come on some Kendrick vibe” and I didn’t really like that at first, but I was like, I hear what you’re saying though, I got you. Working with bands is just different from working with rappers and producers who know what to expect, I guess. So, I had some poem that wasn’t written to any beat and I tried it on the beat, and it ended up sounding okay. Then I just worked around with it. I’m happy with how it turned out and I’m grateful for the experience with them.

Joe: Lord Apex is very talented. We changed one thing and sent it back, and it was done. What he did was what we wanted. It wasn’t shallow, and it was more thoughtful.

Antonio: Everything came from those four chords at the beginning, and we just jammed on them to see where it would go—to keep it organic. It was quite a fast process too. At the time, we had accepted a gig at Sticky Mike’s (RIP) and we only had half of a song. We had three weeks to write a few tracks. We ended up writing four tracks, and ‘Brink’ was one of them. Obviously, we didn’t have a rapper on it then, but the pressure of having one gig date and having to make a few tracks in a month led to ‘Brink’ and our new EP.

Joe: Those tracks have grown so much since then, though. They are nothing like they were.

How did the Chunk project get started?

Joe: I used to do my own solo project, and I was looking for a drummer for some tracks and Ferg from the punk band, Guru, drafted in Antonio because they were on the same course and we just started playing. I was like shit, this guy’s quite good.

Are you working on any new material at the moment?

Joe: We’ve got three new tracks pretty much ready. For one of our new tracks, we’re looking for a female vocalist. The other two will probably be instrumentals, and we will possibly squeeze another hip-hop instrumental in there. To be honest, I’d like to work with Lord Apex again.

Antonio: We just want more exposure, more gigs. There are loads of young rappers around that we’d like to work with.

Joe: Yeah, like his Elevation Meditation crew, Finn Foxell, Louis Culture–they’re a bit out of our reach at the moment, but who knows. We’re all moving to London in September, so, hopefully, it will open everything up. Unfortunately, I think the Brighton scene is a little limiting because it is a small town. There’s a lot of talent here, but the Hip Hop scene is a bit small.

When picking a due diligence data room, it is important to pick one with advanced digital rights management and data… END_OF_DOCUMENT_TOKEN_TO_BE_REPLACED

The world as we know it has ended. A nuclear conflict has virtually obliterated human life from planet earth. A… END_OF_DOCUMENT_TOKEN_TO_BE_REPLACED

“Women represent over 50% of the population in Brazil, and if motorcycle-riding former army captain Bolsonaro, is to have any… END_OF_DOCUMENT_TOKEN_TO_BE_REPLACED