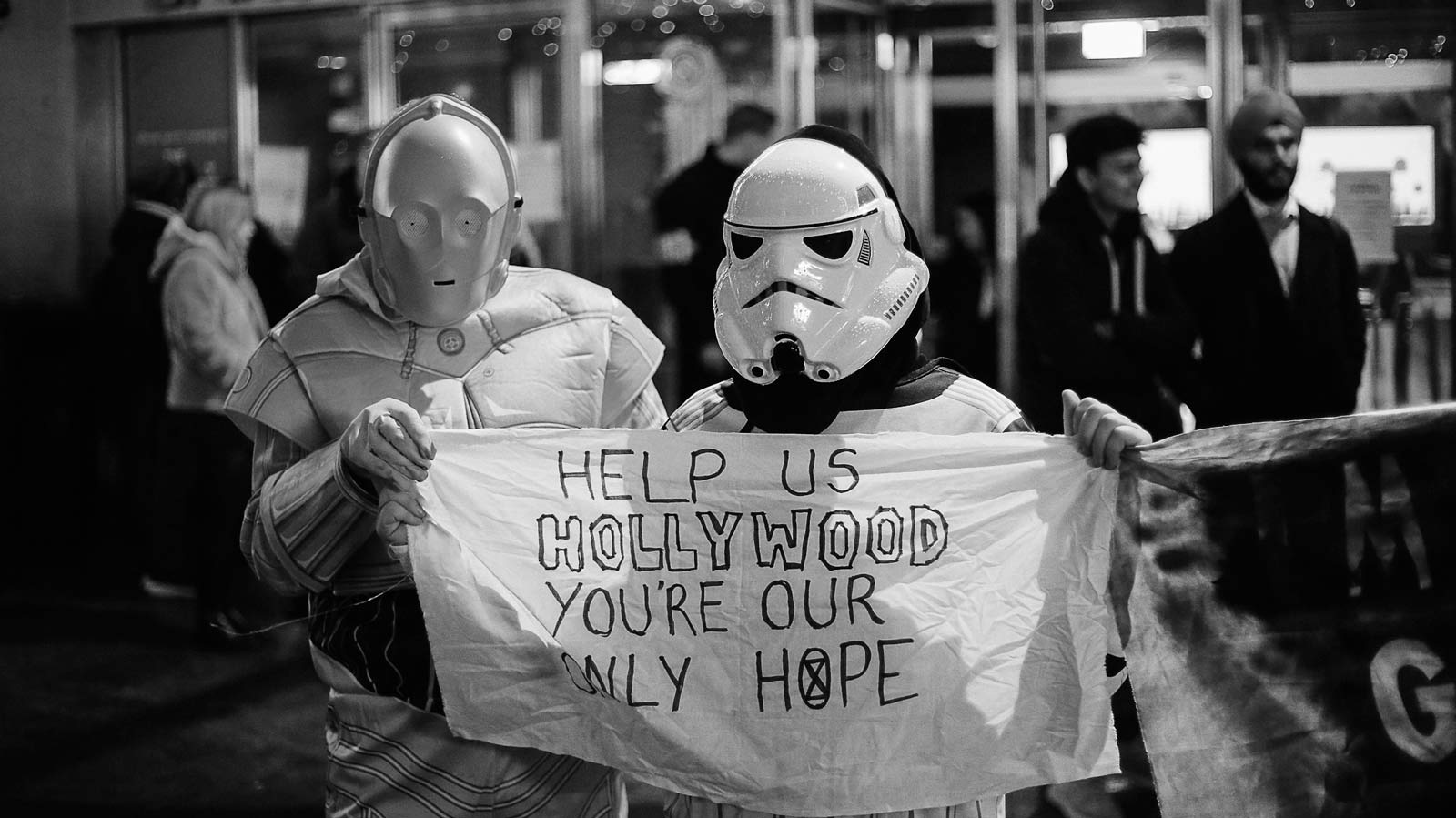 #filmstrikeforclimate – A group of British filmmakers from Extinction Rebellion UK, occupied the red carpet at the Star Wars Premiere in London. They are calling for Hollywood’s film industry to use their immense influence and join Extinction Rebellion in “Telling the Truth” about the climate and ecological emergency. The action lasted only a few moments, the activists were peacefully removed from the area.

Dressed as Rebel Alliance characters, they lay down on the carpet and called for Hollywood’s film industry to join Extinction Rebellion in their quest to tackle the greatest threat facing our planet: the Climate and Ecological Emergency.

People from across the UK took part in this dramatic plea to Hollywood. They did not intend to shut down the premiere, but to make sure their message was heard.

Extinction Rebellion group wants industry leaders and stars of the silver screen to use the power of cinema to show a clear vision of a better and juster world, lighting the way to help guide society through the impending crises and man-made disasters.

Alfie Warren-Knight, founder of #FilmStrikeforClimate, quoted Harrison Ford’s speech at World Government Summit in Dubai: “We are faced with, I believe, the greatest moral crisis of our time”. The film industry must use its influence and power of storytelling to help people around the world to spark a public discussion on this climate and ecological emergency before it’s too late. It has shown in the past how it can mobilise around other vital issues in society, such as the #MeToo movement.

The industry must show a brighter future is still possible, and inspire people to rise up against the ‘Evil Empire’ of ecocidal business-as-usual. We need radical culture and system change to prevent climate and ecological breakdown. We must join forces to improve our chances of a liveable future.”

Films can play a vital role in facilitating public discussion and changing attitudes and behaviours, as shown by films such as Philadelphia, Biko, Blood Diamonds, Gorillas in the Mist, Blackfish and Supersize Me. Cultural figures are increasingly using their influence to draw attention to the climate emergency. Actor Mark Rylance resigned from the Royal Shakespeare Company over its BP sponsorship, and actress Jane Fonda has been arrested multiple times as part of climate strikes in the USA. Still, industry bodies are yet to make similar commitments.

Ashley Joiner, Director of ‘Are You Proud’ – the LGBT rights history documentary – said: “Films have the power to transport us to new worlds, to educate us and open our eyes to new possibilities – that’s what Star Wars is all about! The responsibility is on us as artists to create work that educates on the realities and empowers audiences to make a change. I fully support #filmstrikeforclimate and encourage the industry to do so too!”

Tom Richards, a respected wildlife film producer, said: “Like the rebels of the Star Wars movies, we are engaged in a struggle against the destructive and dark forces that are already killing countless people in the Global South and threatening civilizational collapse in the near future. We have no time to waste. So we have travelled here today to encourage the industry to become opinion-leaders and role models in climate justice and planetary protection. A better world is possible: one with cleaner air, wildlife saved from extinction, food security and more closely-knit supportive communities. Cinema can light the path to that future with its inspirational storytelling. Please help us, Hollywood! You’re our only hope!”

#filmstrikeforclimate is a campaign launched by members of Extinction Rebellion Filmmakers community and Greta Thunberg’s Youth Strike for Climate movement.

This action is their second direct action as part of this campaign. The first one was a mass leafleting action, coupled with performances – a Star Wars themed orchestra outside the BBC Natural History Unit and beatboxers at the Bottleyard Film Studios. Call to action leaflets highlighting the parallels of the struggle of the climate and the Star Wars narrative were delivered to around 80 key film locations around the UK.

Its demands to all global film institutions are to:

Declare a Climate and Ecological Emergency.

Time has almost entirely run out to address the ecological crisis which is upon us, including the 6th mass species extinction, global pollution, and abrupt, runaway climate change. Societal collapse and mass death are seen as inevitable by scientists and other credible voices, with human extinction also a possibility, if rapid action is not taken.

Extinction Rebellion believes it is a citizen’s duty to rebel, using peaceful civil disobedience when faced with criminal inactivity by their Government.

The Government must tell the truth by declaring a climate and ecological emergency, working with other institutions to communicate the urgency for change.

The Government must act now to halt biodiversity loss and reduce greenhouse gas emissions to net-zero by 2025.

The Government must create and be led by the decisions of a Citizens’ Assembly on climate and ecological justice.

Stay in touch with Extinction Rebellion:

Hidden away in a desktop file named ‘father’ in a studio overlooking the Adriatic sea, there was a lost, forgotten… END_OF_DOCUMENT_TOKEN_TO_BE_REPLACED

Brooklyn rapper Your Old Droog is replacing cultural figures at a rapid rate of knots in the shape of projects,… END_OF_DOCUMENT_TOKEN_TO_BE_REPLACED