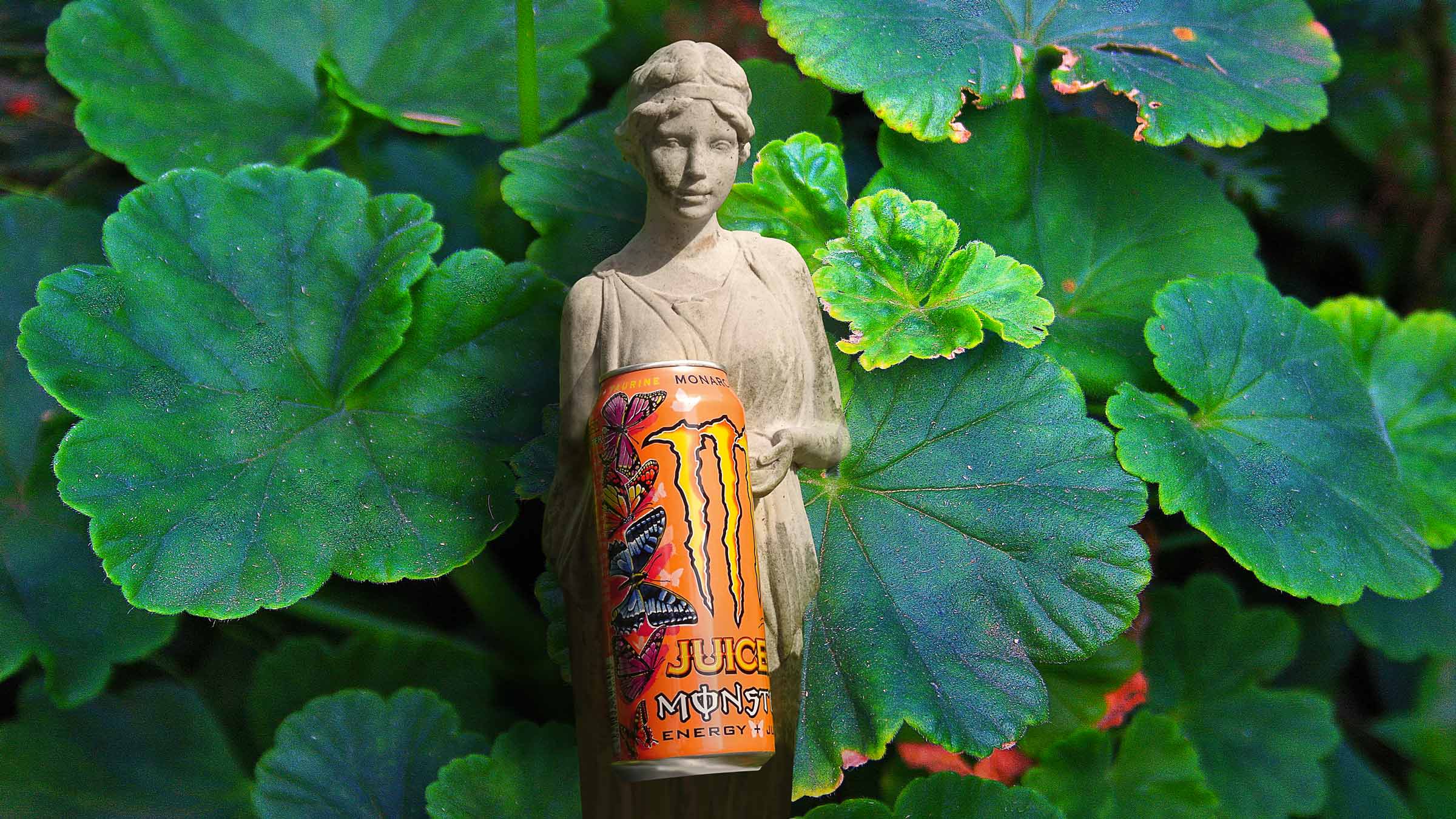 We were somewhere around Nook’s Cranny on the edge of the town plaza when the Monster Energy began to take hold. Cracking open a cold Monster Energy makes observable a smoke rising from the tear strip aperture which appears in this instance like the steam rising from molten lava as it hits the ocean waves at a very hot temperature.

This is – perhaps – a very hyperbolic description of a moment in time that defines a civilization that may one day become amnesic to the sound of an aluminium can being cracked open on a lonely night, in a lonely bedroom. It was in this bedroom – say – where a person was invited to an Animal Crossing: New Horizons firework display via local connection. As that person was standing there – full of inositol and B vitamins – handing over virtual currency for a go on the in-game raffle, all this person could think about was the uncanny phenomenon of virtual bubble tea, the taste of chewy tapioca disappearing behind an aesthetic representation.

I don’t even know what inositol is; but it sounds cool, right? So – in this world we made for ourselves – a chemical called inositol is heading straight for this person’s bloodstream like they’re playing out fear and loathing in a virtual town. Reading on a smartphone screen turned to full brightness that inositol is a sugar alcohol makes this person think they’ve really screwed over their sobriety clock, but it’s all good folks, because turning one’s gaze from a virtual representation of ‘Ramune-Soda Cotton Candy’ to the writing on the back of this aluminium can reveals that Monster Mule is – in fact – a non-alcoholic beverage.

At the beginning of the book, Mythologies, Roland Bathes writes, ‘The virtue of all-in wrestling is that it is the spectacle of excess.’ And it is perhaps for this reason why there is an almost perfect synthesis to be made between wrestling and these kinds of energy drinks which are both – in a way – emblematic of something like a culture of excess. It is not coincidental that the excess of violence that is burnt off in the UFC through blood and bruised flesh takes place in an arena bearing the symbol of Monster Energy, which at the time of writing this was an official sponsor.

Let’s say – until now – this person had always avoided Monster Energy after witnessing that one creepy viral video of an emergent Evangelical Deconstructionism made famous by that highly meme-able phrase, ‘bottoms up and the devil laughs.’

“What has Christ got to do with an energy drink, let alone the word monster?” The conspiracy theorist inquires in the YouTube video in question, later asking, “Now – do you know what a milf is?” Of course, nobody wants Jesus to send them to the fiery pits below for drinking something with a high caffeine content. Nevertheless, it could be said that such videos – particularly those in which preachers are seen connecting the dots between Abrahamic mythology and the ideologies of allegedly demonic-corpos – are an excellent example of a Christian Postmodernism in action. It is a form of conspiracy deconstruction applied through an evangelical lens wherein certain cultural phenomena are subsumed into that mythological and eternal battle between good and evil. It seems God-fearing postmodernism has become a delirious attempt to bridge the mythologies of the past with the mythologies of the hyper-present through a peculiar form of referential miscibility.

Recently saw a particularly entertaining example of this form of deconstruction as it pertained to Doja Cat’s relationship to the usual suspects of Baphomet, Freemasonry and a music industry allegedly concerned with the buying and selling of human souls. Watching these conspiracy theories late into the night has a person half expecting Doja Cat’s music videos to have also been filmed by Stanley Kubrick.

Looking at a small selection of these Monster Energy drinks and a person might discern from the scientific language – which is so-often scrawled across them – an appropriation of sorts from something akin to skin-care advertisement. With any hope we are not far from a collagen enriched beverage doubling up as a facemask.

Returning to the design of Monster Mule and any aesthetician worth their B vitamins might recall a colour palette as it relates to coffee beans falling from a burlap sack. Notice the plush feel of the can – the tasteful baroque design – the metallic bronze lending itself towards both steam punk vibes and the gentle reminiscence of copper mugs in expensive hipster bars. The very first sip provides a sham-job maudlin moment where the whole shtick of the drinking experience is that of an old timey wild west feel not seen since Will Smith wore a cowboy hat in 1999. Everything about Monster Mule recalls the templexity of walking the frontier towns, walking the promenade to Old Billy’s pharmacy where a person might purchase this cold, ginger brew and a small quantity of something to keep the ghosts at bay.

Comparing the earthy tones on Mule to the even warmer palette on Monster Monarch and the most discerning caffeine connoisseur will – at the very least – appreciate the product design. Reading about this vibrant, orange liquid defined by subtle notes and fruity flavours has a person half expecting to see Monarch as the perfect accompaniment to fish or chicken – Énergie à la Grigio.

It is on the can of this delectable ‘juiced’ variety where colourful butterflies sit against their peachy orange. It is a gorgeous colour combination that only hints towards the colour of that tinted liquid held inside. Behind the warmest hues however, there is perhaps the coldest ambivalence to all of this, observable in the shape and curve of each butterfly wing, the purple, the blue, and the white shadows that lie behind each one soon destined for the recycling bin.

The butterflies are – in some special way – a perfect rendition of something I’ve never seen in real life. It is through their appearance on the aluminium can in this way where their ephemeral beauty is rendered visible in such a way as for the admirer of the can to never again require the need to touch grass – to experience the presence of a butterfly in real life. There is in Monster Monarch a kind of ‘fleeing from nature’ that Bathes also detected in ornamental cookery. An aesthetics as reality reconstituted. And so, here lies butterflies presented against a peachy background to have us forget butterflies against the naturality of the blue sky; butterflies lined up on fluorescent shelves in stores everywhere to never again present as butterflies landing on green leaves, on pale flowers.

The peachy colour of Monarch finds a similarity with the text colour of Ultra Fiesta Mango whose design is not so dissimilar to Maki Itoh’s Mango Loco in terms of colouration and theme. Dare I say that Ultra Fiesta Mango wins over Mango Loco in terms of product design with aluminium that possesses a pleasant hand-feel, a delicate texture that recalls the pleasures of running fingertips over raised lettering. Both this variation and Mule are clearly designed with the tactile in mind, the latter design having a matte finish that evokes the spirit of metallurgy and copper surfaces.

Whilst both Mango Loco and Ultra Fiesta Mango have a ‘Day of the Dead’ imagery to them, it is perhaps the texture and the looks-and-feels-but-isn’t ornamental filigree of Fiesta that adds a level of aesthetic nuance not present on any of the other designs discussed here. When it comes to Ultra Fiesta Mango, there is a nice pairing between the peachy lettering and the warm, rock-pool turquoise which forms the ideal background for the aluminium lithography, the calaveras and calacas whose skulls and bones appear here with a striking level of detail. Next to the all-capitalised words of ‘Zero Sugar’ there is an arrangement of veladoras whose flames seem to flicker when caught in the light. Above these words sits a delicate rose embossing making this design almost too precious to be thrown away.

Even so, Monster Energy Ultra Watermelon is perhaps the most God-tier energy drink discussed here since it manages to achieve the tactile sensation of Ultra Fiesta Mango with the colour tint this aesthetician expected to see from Monarch. To say the neon dream vibrancy of the liquid held inside holds the exact hue of a virtual watermelon – with a refreshing taste reminiscent of a precious liquid cupped in hands from the desert oasis forming at the very bottom of an uncanny valley. There is an additional synchronicity to this design with an aluminium can dressed in firework embossing to match the Animal Crossing firework display playing out between the hours of seven and midnight.

Noticeable in every Monster Energy design is the aestheticization of caffeine for the hyperculture. In the end, there is something emblematic about all of this; a haemorrhagic melancholia in these beautiful designs that evoke the ecstasy of ‘friends and fiestas’ in a profound cultural product increasingly geared towards facilitating late nights of ‘one more game of Call of Duty’, one more game of Redd’s Raffle on the plaza of a virtual town whose essence is so much happier than my own.

“I have always been open to writing any genre and style. I guess that’s why the Moonsama chaos methodology resonates… END_OF_DOCUMENT_TOKEN_TO_BE_REPLACED

Hidden away in a desktop file named ‘father’ in a studio overlooking the Adriatic sea, there was a lost, forgotten… END_OF_DOCUMENT_TOKEN_TO_BE_REPLACED