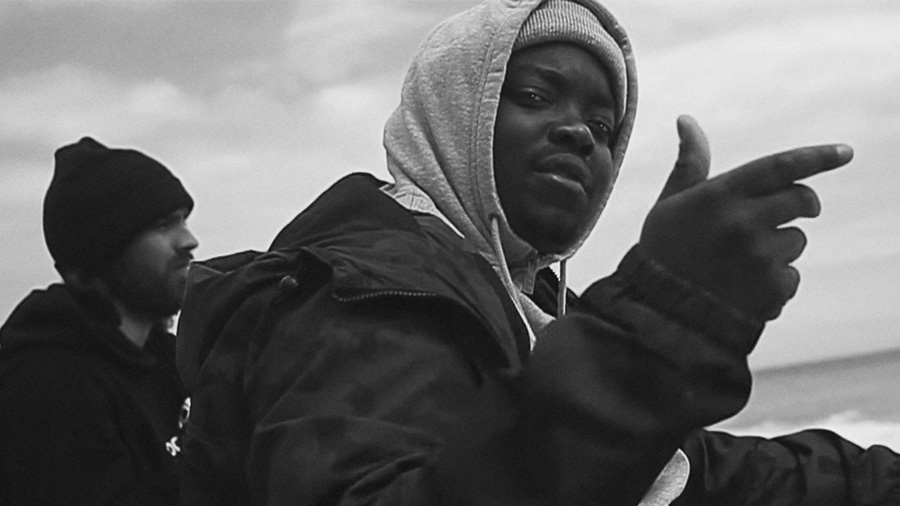 Lessons of Adolescence is the debut EP from Croydon’s up and coming wordsmith Verbz and Yogocop’s renowned producer Mr Slipz. Released by German label Radio Juicy, the album acts as the perfect soundtrack for autumn nights edging into winter. The ten tracks have a recurring theme of nostalgia and childhood, a musical illustration of growth.

VERBZ: It came at a time where I was tryna get my life together and sort shit out. I had recently just broken my ankle and I had mad time on my hands to reflect and write loads of music which I wasn’t doing before, as I was just getting really wavy and being unproductive. When I linked up with Slipz I picked ones that had a similar vibe to shit that matched my bars, it’s funny because weren’t planning to make a full project.

SLIPZ: Initially we spoke on Soundcloud but didn’t get to work until after meeting one day at M.KOZI’s house. We never intended to make a full project but after one recording session, we had half the tracks done. After a second recording session, the album was finished and just needed to be mixed mastered and named.

Lyrically, Verbz delves into his past, dissecting the situations and experiences of his youth and of the people around him with the introspection and unapologetic flair of a truly confident writer and talented artist.

VERBZ: It started back in 2011-12 really, chilling with friends who spat bars and at the time I wasn’t interested in it, I used to write a bit of spoken word though and I listened to loads of Hip Hop so I was always interested. It’s weird because I never saw myself as the type to be spitting.

I don’t think I could describe my sound to be honest, it’s just me and what I’m about and where I’m from, it’s the sound of South London I guess.

Mr Slipz, a producer who has made beats for a huge cast of emcee’s, including Omaure, Frankie Stew, MNSR Frites and Freedom (Strangelove), not to mention producing for pretty much all the Yogocop family, provides throughout the ideal backdrop for Verbz’ contemplative lyrics, keeping heads nodding with his signature dusty beats.

SLIPZ: My style I guess just comes with the way I’m working / what I’m experiencing at that current time. What samplers I’m using, whether I’m working with the mpc2000xl and s950 making Boombap, or the sp 303 and the tape deck. Sometimes I wanna get lit stay up all night and make loads of quick rugged beats and record them live to tape. Other times I might be working on something with an emcee that needs to be mixed, structured and bit more polished. At the end of the month can end up with a range of styles, overall I guess I say a mix of lofi and boombap.

Creatively I use mostly samplers and records, I use Logic for mixing and mastering, although a lot of mixing is done already in the box. I get inspired by lots of stuff from peoples self-development or experiences, to listening to Kashif.

Inspiration and influence come in many forms, and this is an album very much grown out of mutual inspiration, between the two artists, but also between people and place; both citing friends, family and people in general as one of the biggest inspirations to make music.

VERBZ: I’d say the shit I grew up listening to directed me towards making Hip Hop, people like Nas and Guru. But I ain’t never really been inspired by a next man, I am inspired by my peoples though, it inspires me to do better when I see my peers doing good!

SLIPZ: A lot of musical icons inspire me really, as I listen to a wide range of music and find all parts of it inspiring. The concept of creation and artists that are unable to stop creating due to their internal urge; are a massive inspiration to me, people like Kan Kick, Madlib, Brous 1, to the likes of Quincy Jones, John Klemmer and Hermato Pascoal. But mostly a lot of my friends, people, faces I meet and also family inspire me.

I’ve been into music a long time, as a kid, I used to play instruments, although I have not for a while, which is something I wanna get back into. I used to DJ a lot of DnB and Jungle back in the day, but always loved Hip Hop and about 7 years ago just started making it after being inspired by a few homies in Cardiff. Big ups to them they know who they are!

The only physical format for the album will be a very limited, pretty much sold out by now, cassette tape, maybe a nod to the nostalgic undertones of the album, subtly throwing the listener back to their own childhood and their own experiences growing up…

SLIPZ: Haha I guess subliminally maybe? To be honest, we sent the album as a demo to few labels, and Radio Juicy were interested and keen to release it as a tape.  We really like the label and the music that has been released previously on there, so we got back in touch with them. I think the renewed interest in physical music is great, it gives smaller more niche independent labels and artists a chance to exist as well as larger more dominant lucrative labels. This, in my opinion, creates a greater variation in music as well as allowing smaller labels and artists to support themselves. In essence, it keeps much more music alive, I have always been a massive fan of physical music so I’m so stoked my doodes.

Finally, what words of advice do the two have for anyone looking to get into music today?

VERBZ: Do ya thing and don’t be concerned about what others are doing, music should make you happy at the end of the day.

SLIPZ: Just do it, actively make sure to take part every day don’t just talk about it.

Find out more about Verbz, Mr. Slipz  and Radio Juicy.

When picking a due diligence data room, it is important to pick one with advanced digital rights management and data… END_OF_DOCUMENT_TOKEN_TO_BE_REPLACED

The world as we know it has ended. A nuclear conflict has virtually obliterated human life from planet earth. A… END_OF_DOCUMENT_TOKEN_TO_BE_REPLACED

“Women represent over 50% of the population in Brazil, and if motorcycle-riding former army captain Bolsonaro, is to have any… END_OF_DOCUMENT_TOKEN_TO_BE_REPLACED