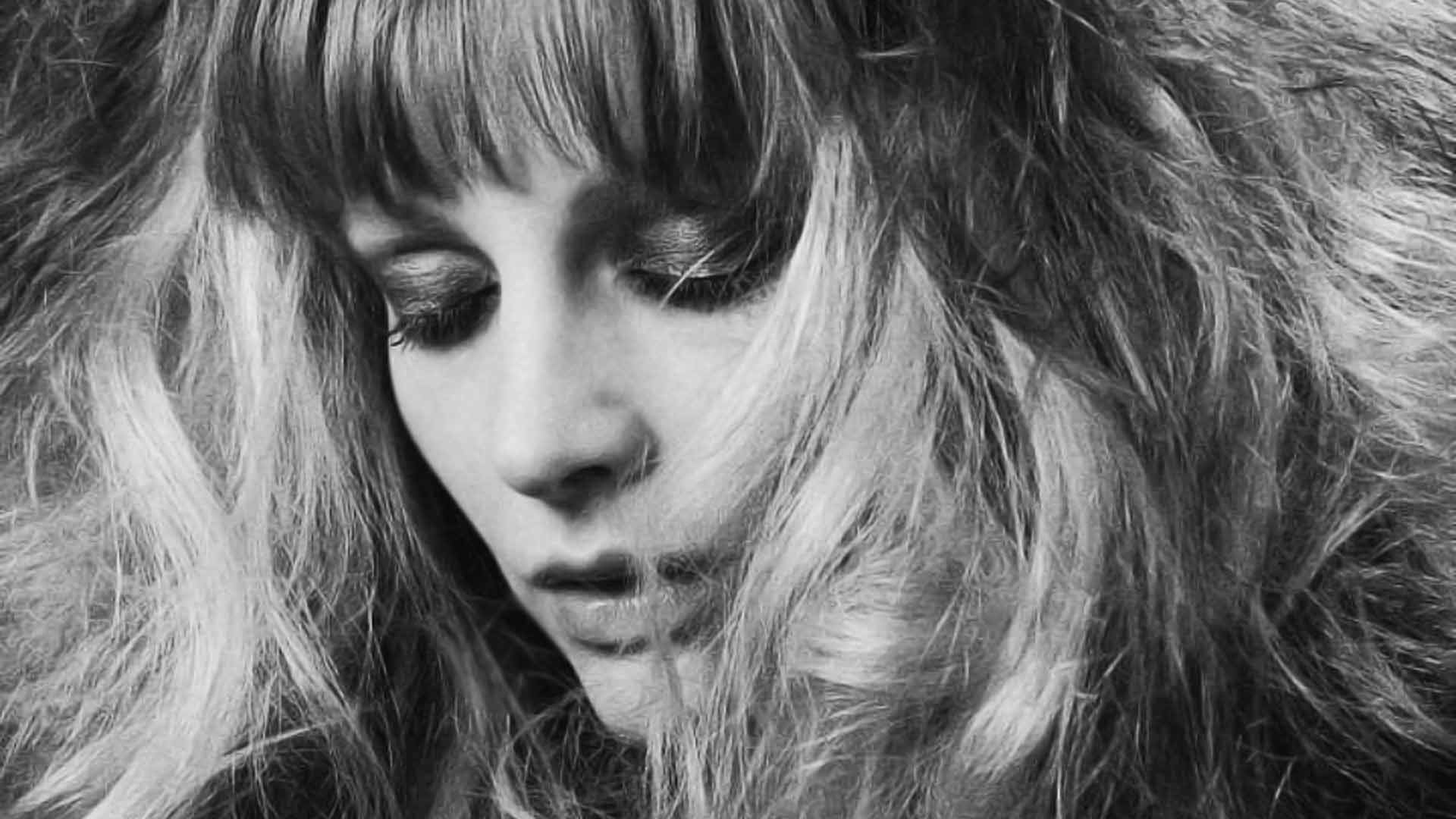 Maggie: A red herring? Perhaps in part. I’m a person who needs to make a lot of stuff, and so during “Lockdown,” I started learning to use programming tools so that I could make music at home. I don’t think of myself as an instrumentalist really, I’m a vocalist. However, I obviously write stuff, and I needed some tools to help me put things together without other musicians to play with. I didn’t set out to make an album specifically. So subsequently, a lot of the tracks are random ideas I was experimenting with. Some were old ideas that I had resurrected. It hangs together through a thread of sonic interest – there’s a lot of string arrangements running through it and 80’s synth stuff.

You have a very glamorous personality that happens to be put in this Punk DIY situation because of Madonnatron. But it seems as if you are now kind of clawing away from that.

Maggie: No, I’m a pretty feral lady, really! I don’t shy away from Punk. I think that artistically, it’s hugely important. What I loved about the Madonnatron adventures and escapades was very much that it was DIY, and we just kind of flung shit at the wall, really. There’s some fascinating stuff going on now – I think Tim from the Windmill calls this Noise-Pop. People like Hayden Hughes (Chuppa Cabra) and Pink Eye Club just perform their material with (or without) a guitar and a laptop with rebelliousness and fearlessness. I think Punk is resurfacing with a different veneer, perhaps.

When we say Punk, that could mean so many things now. What do you mean by Punk?

Maggie: I think Punk is a lot about freedom – the freedom of doing something yourself without somebody else imposing a direction for you. What’s needed right now, I think. Music felt pretty stale for a long time because I struggled to find anything that I felt had any attack. Nothing felt confrontational, and there seemed to be so much cut and paste. Right now, I think there is a little bit more innovation happening. Maybe because people have had time to step away momentarily from their daily grind and think about stuff differently? So, I don’t want to move away from that DIY sensibility.

Tell me about the video. What kind of conversations did you have about the concept with Liam (Trashmouth Records). How did they evolve as it was filmed?

Maggie: (laughs) “My hair’s stuck in the fan!!” No, Liam wanted to do a video. He had this real attachment to the image of my face that you see repeating throughout. It actually reminds me of that famous mugshot of Myra Hindley, the Moors Murderer from the ’60s! Anyway, he really likes it, and it was just going to be like a glorified pack-shot video. Still, then there were some glitter curtains floating around and a fan and a free evening, and so we shot it in his basement in about an hour. It was easy enough because there was no preconceived idea or anything to be precious about. I was pleased with the Twin Peaks kind of aesthetic merging of the Black Lodge and Studio 54. That really was a genuinely DIY no-budget kind of effort.

In one of the recent interviews, I read that you felt the video was very Twin-Peaksy, and I got that a little bit after you said that. It does focus on your face a lot, similar to how Laura Palmer’s face is always super-imposed over something in every other episode. It makes you meditate upon who that person was and what that means to everyone around her. In the video, I’m forced to meditate upon your face in that way. What do you think about your face when you see it repeating at you?

Maggie: Er, I try to separate from that bit because you could go down a real cringe-fest rabbit hole with that, couldn’t you? I’ve wanted to look at it in terms of the concept of projecting a character. In this case, a somewhat murderous female – rather than me!

I see her as an anti-hero rather than a villainous character. Anyway, you have said that you think Tina Turner is a conduit for the human condition. With that in mind, what are you a conduit of?

Maggie: That’s tricky. I’m not sure exactly, but I would say that I’m not the best conversationalist. I’m awkward. I think with music, there is a moment there where you can be really truthful. You can be as intense, confrontational, and obnoxious as you like because it’s so subjective, is “safe” for you, and “safe” for whoever is listening. Some people are really gifted when it comes to communicating with other humans socially. I’m not one of them, and so I’m just trying to channel (at the risk of sounding like a twat) some truth in some way that I struggle to avail elsewhere.

The lockdown has given you a chance to write music that you frame as more introspective. What did you learn from this period, and how did it impact your music, if at all?

Maggie: I was in the West Country (where I’m from ), which was a relief in many ways as I’ve lived in London for years now. I realised ( like many others, I’m sure ) that I have a real need for the outdoors. I watched the seasons change, the sky. It really drove home something that I engage with a lot, that we are all creatures and that it is essential to remember that we are creatures. Conversely, I really embraced not being social and felt relieved just to be in my own company. A lot which isn’t something that I was ever good at before. It has, er, calmed me down a bit perhaps and taught me a lot about boundaries.

Did that impact the music?

Maggie: Yeah, I had a lot of time to reflect on things that I haven’t appropriately thought about in years and years – if ever. Often, you are so busy living the next bit of your life that it’s hard to reflect authentically on what has happened. Many of the songs were about things from years and years ago that I had a chance to think about through a new lens.

You have a new classical music project on the horizon. What can you tell us about this?

Maggie: It’s with my friend, conductor, and composer Luke Styles. He wants to look at isolation. We plan to put together a collaboration on a concept album using orchestral and choral groups. It’s not something I am used to doing, but it’s exciting to work with somebody so driven and top of his game.

You say that you find music a helpful way to communicate outside of the common pitfalls of human interaction. What Pitfalls have bugged you recently?

Maggie: I think that there is a lot of fear around at the moment – understandably. I’m a genuine disciple of the church of Star Wars on this subject. It distorts how people are with one another, and that’s a real problem for us all, especially in places like cities where everybody is constantly fighting for space and attention. I think fear makes people less open to one another. Compassion gets somewhat lost. I think we just need to grow more plants.

You do other stuff apart from music. I have ascertained that you like gardening.

Maggie: Yeah, I guess that’s just one of my ways to deal with the fear I am talking about. During lockdown, I ran long distances, danced a lot, and grew vegetables. I will forever remain in the thrall of nature. I find it a pretty spiritual process growing potatoes, it would seem. DM me if you want to come and hang out and grow legumes – we don’t necessarily have to talk. Just listen to Tina Turner and plant things.

Stay in touch with Trashmouth Records:

When picking a due diligence data room, it is important to pick one with advanced digital rights management and data… END_OF_DOCUMENT_TOKEN_TO_BE_REPLACED

The world as we know it has ended. A nuclear conflict has virtually obliterated human life from planet earth. A… END_OF_DOCUMENT_TOKEN_TO_BE_REPLACED

“Women represent over 50% of the population in Brazil, and if motorcycle-riding former army captain Bolsonaro, is to have any… END_OF_DOCUMENT_TOKEN_TO_BE_REPLACED