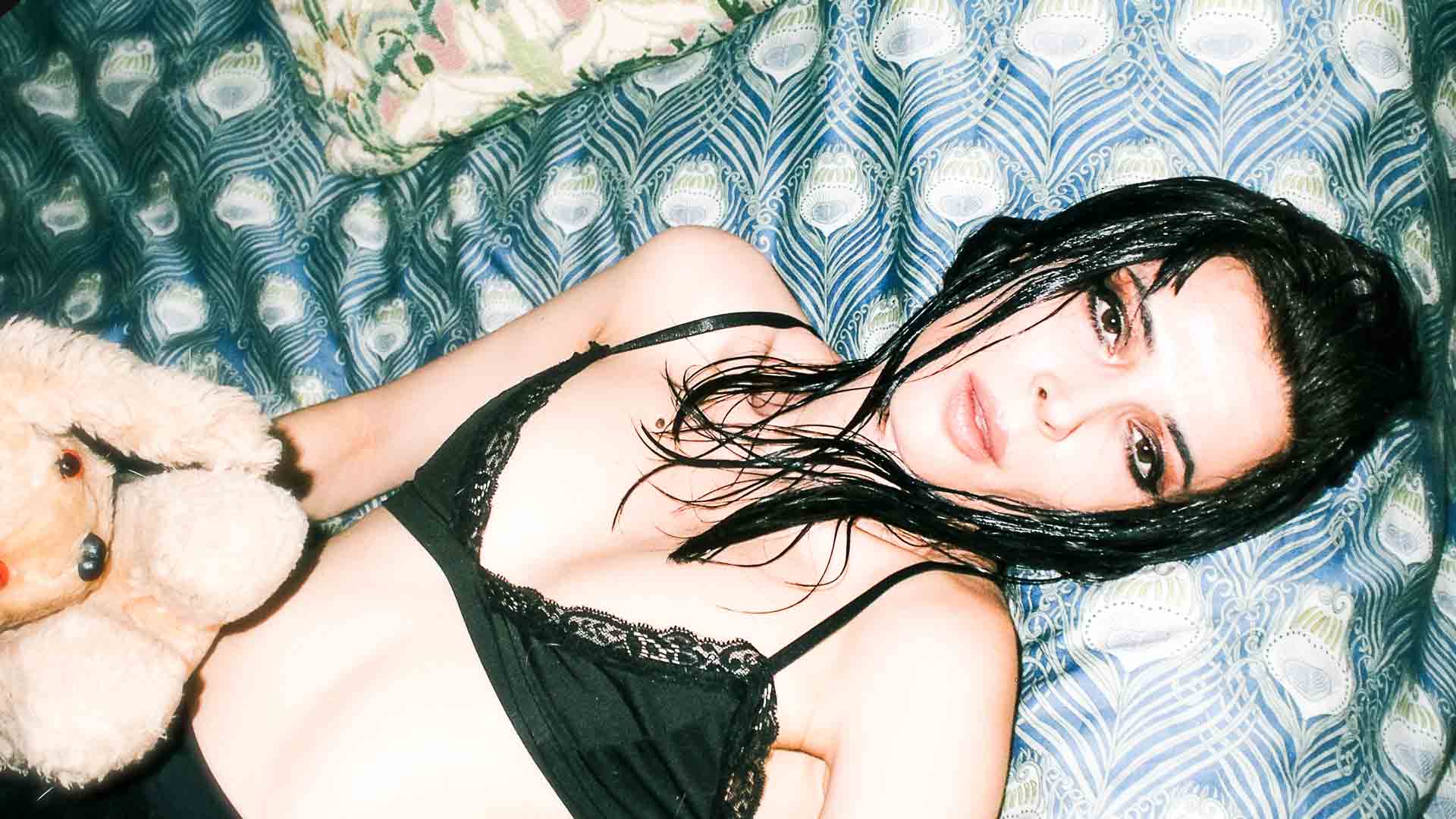 Placing negativity in art as a form of self-care and wearing dead relatives’ clothing as a form of connection are just two of the subjects of this interview with Sofia Martins Gray, the front person of Starsha Lee.

You recently said that you’re no longer existentially angry. Can you explain what that means for you and how you reached a more peaceful state of mind?

Sofia: I thought I didn’t say it right as soon as I said that. I was referring to the first phase of Starsha Lee, where the combination of my existential questioning with mundane events was out of hand. It was also around the time that I was constantly reported online with hate comments and false accusations, and I didn’t deserve any of that.

What put me out of that angry-child register was understanding things for what they are and people for who they are. I used to be too naive. I was easy prey. I would open my door to enemies hoping they would like me. I was wrong. Understanding something can anaesthetise that something. Rationalising is a major weapon that not many people seem to realise. I can see everything at a distance, and everything seems pretty silly now.

As for the existential questioning… well, it will never go away because there’s no answer. How can you answer to mortality? I keep the questioning as a healthy illness.

Are aspects of that healthy illness explored in the new EP?

Sofia: I think my attitude on the vocals is slightly different, less angry child tone! But no matter what I do, I’ll always sound a bit loud.

You’ve described your anger via Starsha Lee as ‘one room in a house of many rooms.’ Can you talk us through other rooms of your artistic house that perhaps you’d like people to be more aware of? I surmise the acoustic version of ‘Plausible Hate’ is one you’re relieved to have exposed to the world.

Sofia: I’m extremely quiet and feel comfortable in solitude. Therefore that generates a very different approach in art from what people see in the band. My photography, for example, comes from a different place than Starsha Lee’s performances. It’s the same universal concern but displayed with a different approach. This might seem like a joke, but I don’t like to speak in public places. I always need my husband to ask for things for me in the shops. I’m all about endless afternoons in the countryside with cats, a camera, and a sketchbook. I have as many rooms inside as many characters I write about. I’m unsure if I feel relieved by exposing ‘Plausible Hate.’ It was the first time I sang with only an acoustic instrument. I need to do it more often to understand better what delivery I should have.

Do you prefer the reclusive life you lead for a particular reason, or do you see yourself becoming more social as time passes?

Sofia: This is one of those genetic traits that doesn’t allow me to choose. I was very independent as a child, but my teen years were ruined by socialisation –  then, when I started Philosophy studies, I returned to myself. I’m not the person who says I dislike human beings. It’s not that. I just genuinely am like this. I remember being a child, and I could be left alone in a room for hours on end and never get bored. I still am like that; I spend hours daily walking back and forth in the kitchen, imagining things. Crispin thinks it’s funny. Before I do my photographs, I’ve already spent many hours imagining them. That’s why the majority of them are a failure because I rarely meet my own mind.

We’ve discussed your self-hate on camera and have located it as a particular source of strength. When did you identify this hate, and how do you manage it so efficiently to remain functional enough to create art?

Sofia: I don’t even know where to start… I think there’s a problem defining what art is, and we all know that. I still remember many years ago when, before the internet became a daily thing, an artist let a dog die from starvation in a gallery, claiming it was a work of art… Well, it was rather a work of crime. This person didn’t understand the context of art, he misunderstood some basic notions. Even if he didn’t kill the poor animal, if it was just for the conceptual scandal, that was not very artistic…

Art is not the place to take the life of a sensitive being. That’s killing. Neither is the place for personal revenge or other egotistical manifestations. Art should be a place for the elevation and research of the spirit. I’m not saying it’s easy, not all artworks are achievements.

My self-hate becomes universal when I expose it through an artistic medium. That’s where negativity should be, locked and exposed in a medium. If people created more, they would hate less. Now, whenever I talk about elevation, I must confess that I’m not saying my band has that. I try to expose things as concepts, but it’s not a work that could be displayed in a gallery.

When did you discover your self-hate, and how it became a source of strength?

Sofia: That’s one of those questions where there’s no middle ground. Either I say it, or I don’t. I will answer with an economical version because I’m unsure if I can handle too much confession about this. Yes, I do remember. Before my teen years, my personality became apparent, and I discovered some things about myself that didn’t fit socially. I had an undefinable personality that was neither this nor that, and to make things worse, I always had a serious lack of motivation for the external world. My school notebooks were full of drawings and nothing else. Of course, there’s a price to pay, people notify you that you aren’t suitable. Socialising is similar to mass consumption, all participants are synchronised, all for the same purpose. Nothing against it. I’m only describing. Even knowing I had a few party years, I ditched that quickly. When I turned twenty-five, I invited everybody to my birthday at a restaurant, and I didn’t show up. It was laughable. It’s a strength when I think, “Hey, I might not be like you, but I have good intentions.”

What did your friends make of your vacancy on your own birthday?

Sofia: My friends know me, and it was laughable. I remember receiving a text saying, “you come here now!”. So I went, apologised and we all laughed.

Why do you use old houses as locations for your self-portraits? Would you ever consider taking photographs in a modern building?

Sofia: I didn’t choose that house. It chose me. Due to an unfortunate event in my life, I had to move to my late grandmother’s house. It’s a very old house, very damaged. Suddenly, I’d lost part of the roof during a winter storm, and having to live inside that house, with my grandparents’ ghosts all over and all that damage brought me to photography. I needed an external eye to witness what I was going through, so I started a journal with images. I felt the strange need to place myself without a face in that tragic scenario. There were holes in the walls, it was cold, and I had no money. That’s when it all made sense to me. Before that, I used to draw; I didn’t photograph much. Photographing started as a need to overcome something horrible. Modern houses have no speech. I think the experience of my grandmother’s house shaped my taste.

You used to wear your grandmother’s clothes onstage. Tell us about her and your thought process on wearing her clothes.

Sofia: I respect the architecture of Le Corbusier and Frank Lloyd Wright, for example. Corbusier had a big impact on people’s lives. If I remember correctly, he used to say that “a house is like a machine.” It has to be functional, like a human body. And I understand many photographers like modern-looking houses due to the naked lines they pronounce, a more visible geometry, so to speak.

I miss my grandmother a lot, you know? Also, my great-grandmother. I felt the bizarre need to use her clothes, rip them off and sew them as a corpse brought to life. She was with me all the time during those Starsha Lee gigs. She still is. My great-grandmother asked me before she died to never forget about her. So I use her rosaries and buy a lot of rosaries because of her. I even sewed rosaries to Starsha Lee t-shirts.  We sold quite a few, so I had to sew a lot! It was worth it. Sometimes I need more than memory; I need a tactile memory. I mean objects that make me remember people I can wear or have with me. This is an attempt at creating a new timeline, new possibilities of something that is no longer alive. Everything I do, everything, is reduced to this.

“I have always been open to writing any genre and style. I guess that’s why the Moonsama chaos methodology resonates… END_OF_DOCUMENT_TOKEN_TO_BE_REPLACED

Hidden away in a desktop file named ‘father’ in a studio overlooking the Adriatic sea, there was a lost, forgotten… END_OF_DOCUMENT_TOKEN_TO_BE_REPLACED