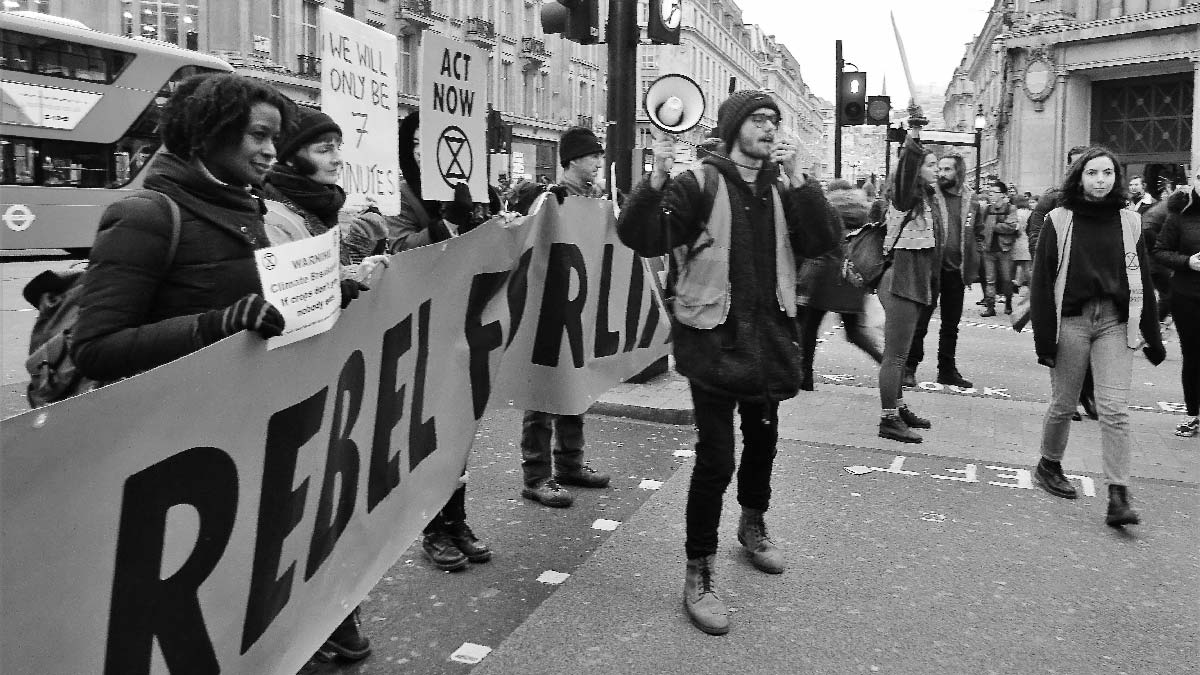 “Everything is here, heaven has come down to earth, the heaven of utopia, and what existed in profile as a radiant perspective is now lived as a catastrophe in slow motion.” Jean Baudrillard, Fatal Strategies.

On 25th April 2019, Phil Kingston of the Christian Climate Action affinity group was lifted down from a DLR train in London where he had been protesting. An image soon circulated of the 83-year-old taken away by police escort. Previous to this event, Phil Kingston stated that “the people who are promoting this economy are only interested in more growth, why do we need more growth?” The truth of our economic system is one of ecological disaster; a reality kept hidden behind the pretence of an abundant utopia sustained by false narratives and illusion.

Two hundred miles away, sits George Osbourne’s real legacy: The Northern Powerhouse, Greater Manchester, a world built on the back of London’s economic vision. With the threat of ecological disaster looming, let’s begin to think about the cities we have built on the back of this so-called economic growth.

The train ticket to the modern city is the admission fee to the order of the hyperreal. It is the material gateway to a distorted sense of reality and illusion. Exiting a train at Manchester Piccadilly, for example, and you begin across a grey gangplank towards the hypnotic lights of Upper Crust, Yo! Sushi and an M&S Simply Food. These spheres of convenience are peppered with neon and billboard aiming to please and prime, psychologically, every arriving consumer.

Navigating this world of hypnotic images is easy for the indoctrinated, that is except for a singular peculiarity appearing saturated with a less than an obvious intent. Spilling forth from Manchester’s train station brings the singularity that stands with the warped sentimentalism of monumental propaganda. This is ‘Victory Over Blindness’; a statue depicting seven blinded soldiers from the First World War. In the endless recycling of war imagery, we are left with an unusual banality of expression. That is to remove all meaning from the actual suffering undertaken and deliver in its place the facelessness, cold bronze of some distant mythology. True poignancy could be achieved, for example, through the rendition of those maimed during the Manchester bombing of 2017 – a reminder of disastrous foreign policy and the crippling austerity measures of the here and now. However, the real message of these blind soldiers isn’t to jog our blind memory from our blind ignorance, but rather to remind commuters that no matter how hellish the landscape will appear here on out. It will never be as hellish as the mythologised iconography of the past, which is to continuously address a bygone unchangeability as opposed to the cruel reality of our everyday lives as they appear today. In ‘Victory Over Blindness’, the horrors of the past are used to hide the new horrors of the present, and in doing so conceal the horrors of the future.

Of course, reminders of the 2017 bombing are everywhere in the safely-coded iconography of the yellow/black bumblebee, an image no more regulated than at Manchester’s independent retailer of the year. Approaching this ‘totem of indie commerce’, the swollen, bloated masses are greeted with no fewer than three Café Nero and no fewer than twice that many homeless faces. In 2018, The Manchester Evening News reported a sevenfold increase in homelessness since 2010, one of the highest figures for homelessness outside of London. This is often used as evidence of the system’s failures when on further consideration these everyday signifiers of poverty are integral to the overall system’s success. The threat of homelessness amongst the order of the hyperreal becomes another continuous and visible deterrent for those who fail to play along with it. Charities that target homelessness and mental health issues, in particular, often focus primarily on the social reintegration of the individual with neoliberal economics profiteering from the symptomatic, rather than addressing any serious causation. In fact, many charities rely on this continuous cycle of social disintegration to provide lucrative administration salaries (and expenses) to their managerial staff. While Oxfam, for example, panhandle for donations across socioeconomically disadvantaged highstreets, CEO Mark Goldring claims £12,006 in expenses to supplement his £127,753 salary.

Affleck’s Palace then, also described as an ‘emporium of eclecticism’, is four floors of independent boutiques and stalls that have (to everyone’s great admiration) somehow managed to avoid the stringent demands of retail law. The proverbial fly in the anarcho-capitalism arrives on entrance, where the consumer is greeted with a flaccid mantra of anti-phobias, displayed through the visual hierarchy of a flight of stairs. This is all proceeded by a sign of instruction, ordering the clientele to report any ‘hate crime’ – as if the culprit of such reckless hatred already existed inside the building – or inside of us – waiting for an exorcism. These signs appear in a city that has seen a huge spike in violent crime, where serious investigation is derailed by backroom conversations of what is and isn’t cost effective policing. Of course, illusions of eclecticism fade from memory, especially towards an exit, where the bumblebee iconography reappears, once again, in the form of broaches, anklets, necklaces, tee-shirts, and the other assorted co-opted manifest of consumer trash. The tragedy of these symbols, in relation to sign-economy, are in their exploitation towards profits. Through these signs and ideological assurances, we are confronted, absorbed, gilded by our melancholic apathy for a system that offers the pretence of consideration and empathy, while obviously diminishing both. Let’s compare, briefly, Manchester’s independent retailer of the year to the department store, Selfridges & Co. This is Manchester’s ‘glass-fronted department store for iconic, high-end fashion, beauty and electronic designer brands.’ While Affleck’s presents an alternative (faux-rebellious) consumer experience, Selfridges & Co. presences the standardised, old-world consumerism of Gucci, Chanel and Louis Vuitton. In many ways, both department stores work in tandem with the other, peddling in the signs and signifiers of their conflicting worldviews. However, when you overlook those shop owners trying to earn a living through some increased level of self-determination, the only real difference between these two department stores is an aesthetic one.

In an attempt to escape these worlds of consumption, you would expect to walk around somewhere like Manchester Art Gallery and feel a certain level of cathartic rejuvenation. As of early 2019, ‘Halima Cassell: Eclectica–global inspirations’ forms an intense illustration of the distillation of modern values as they appear under the order of the hyperreal. Cassell’s exhibition includes ‘the debut of her latest piece, Virtues of Unity, an assemblage of ceramic sculptures which when complete will represent every nation on earth.’ Consequently, everything remains bleached, whitewashed, and sterile; representing a unified art of pure banality, where the co-opted and appropriated ‘global techniques’ of production – alienated and divorced from their local origins – become exalted and the human subject nullified by the neat, cold, calculated turns of perfect, mathematical geometry. As Noam Chomsky states: ‘globalization is the result of powerful governments, especially that of the United States, pushing trade deals and other accords down the throats of the world’s people to make it easier for corporations and the wealthy to dominate the economies of nations around the world without having obligations to the peoples of those nations.’ The most fascinating aspect of Cassell’s hanging pieces is in their lighting arrangement, the obscure shadows cast on the walls behind, presenting the spectre of some contorted, human ghost that might have existed somewhere, once upon a time, before the clumsy inter-connections of globalist bleaching. A return to the world of manufactured environments occurs as you rise through the other whitewashed floors of the art gallery, with each new world connected by the cold, industrial skeleton of glass elevators.

Somewhere in the middle-ground, relegated to a small, dim exhibition room (for reasons of preservation) sits, with the familiar, suffocating air of mythology, ‘Leonardo da Vinci: A Life in Drawing.’ Whilst we can assume pragmatically, that the room is designed for preservation, the sepulchral atmosphere contemporaneously frames the works with a perverse and contemporary desire for the disintegration of human forms. Many of these works of art are sketches at best, faded and drawn to the foreground; diminishing in real-time. On further consideration, the spiritualism and grotesquery of these drawings, at least, remind us too clearly of our genuine-selves, and so the masses reappear from their entombment, appearing noticeably disappointed – unsatisfied – as if all great works of art are best enjoyed unseen. Evidently, these works of art cannot compete with the ecstasy of the modern world, and on exiting the exhibition, ‘A Life in Drawing’ develops into a fascinating spectacle; like a great movement of people emerging, spilling forth from a dimly-lit cinema screen, wishing they hadn’t wasted the money.

In fact, the cinematic (voyeuristic) lens of photography appears on the final floor of the gallery, featured in, ‘Martin Parr: Return to Manchester.’ According to the bland, website copy, ‘Martin Parr shows how the lives of Mancunians have changed but also reveals how there is continuity in how we live our lives.’ Sean O’Hagan, reviewing for the Guardian, wrote that Parr’s vision showed a world that was ‘less commercial’ a place that existed before ‘corporate branding made our cities dully homogenous.’ This hides the real concern that Parr’s work aids the bourgeois normalisation of industrial communities as crass and parochial. After all, these images offer an explicitly bourgeois world-view, where the working-class subject is often reduced to the lazy caricature of Kwik Save clientele.

Moreover, it forms evidence number one to the widespread osmosis of fakery and playacting of late-20th Century Britain. Parr’s subjects stand gleefully with larger-than-life smiles, clutching their eventual seafaring shopping bags of mass-consumption – the trolley carts of utility – and the children who would inherit a world of ever-accelerating integration between what’s real and what isn’t. That is to say hyperreality itself. To say Parr celebrates ‘the humanity of the everyday’ is to ignore the genuine concerns of our social disintegration behind the corporate signs of an apocalyptic neoliberalism. Nowhere is more bereft of this humanity than Manchester Cathedral, a performance space so devoid of its congregation, they must have fled for the cake shop next door. And for their dinner, TGI Friday’s is an enterprise that promises to finally dissolve the conceptual nature of the Gregorian calendar for the price of a two-for-one cocktail and meat (with or without bones) slathered with sugar molasses. These speedballs of the western world are enjoyed through the good feel vibes of one-hit wonders and waitresses with almost-real names.

But why dissolve our humanity through the gradual processes of disintegration? Well, humanity is unpredictable and opaque. For these obvious reasons, acts of unfettered humanity, like those we have seen in Phil Kingston, have become the only real danger to the system. This is why the cults of misery that govern our societies continue to fetishise the doctrinaire of big data and opinion polls in their move towards the technocracy of the statistical. At Manchester Art Gallery – all over Manchester City Centre – culture (rather than, say, ‘the media’ – as is traditionally critiqued) is being used to distil humanity away from itself. These processes of ‘cultural reimagining’ we call the ‘disintegration of the reimagined image’ whereby continuous disintegration leads to the embellishment of false-realities. The ‘reimagined image’ is a push, a hard nudge of the intellect into a transcendence towards, for example, a global collectivism, where the individual mind, with its sharp and grotesque nuances, becomes entirely dismantled; replaced by the dull, submissiveness of the oversocialized native. In this bleak future, we build for ourselves; we might one day look into the mirror and see nothing looking back.

“I have always been open to writing any genre and style. I guess that’s why the Moonsama chaos methodology resonates… END_OF_DOCUMENT_TOKEN_TO_BE_REPLACED

Hidden away in a desktop file named ‘father’ in a studio overlooking the Adriatic sea, there was a lost, forgotten… END_OF_DOCUMENT_TOKEN_TO_BE_REPLACED