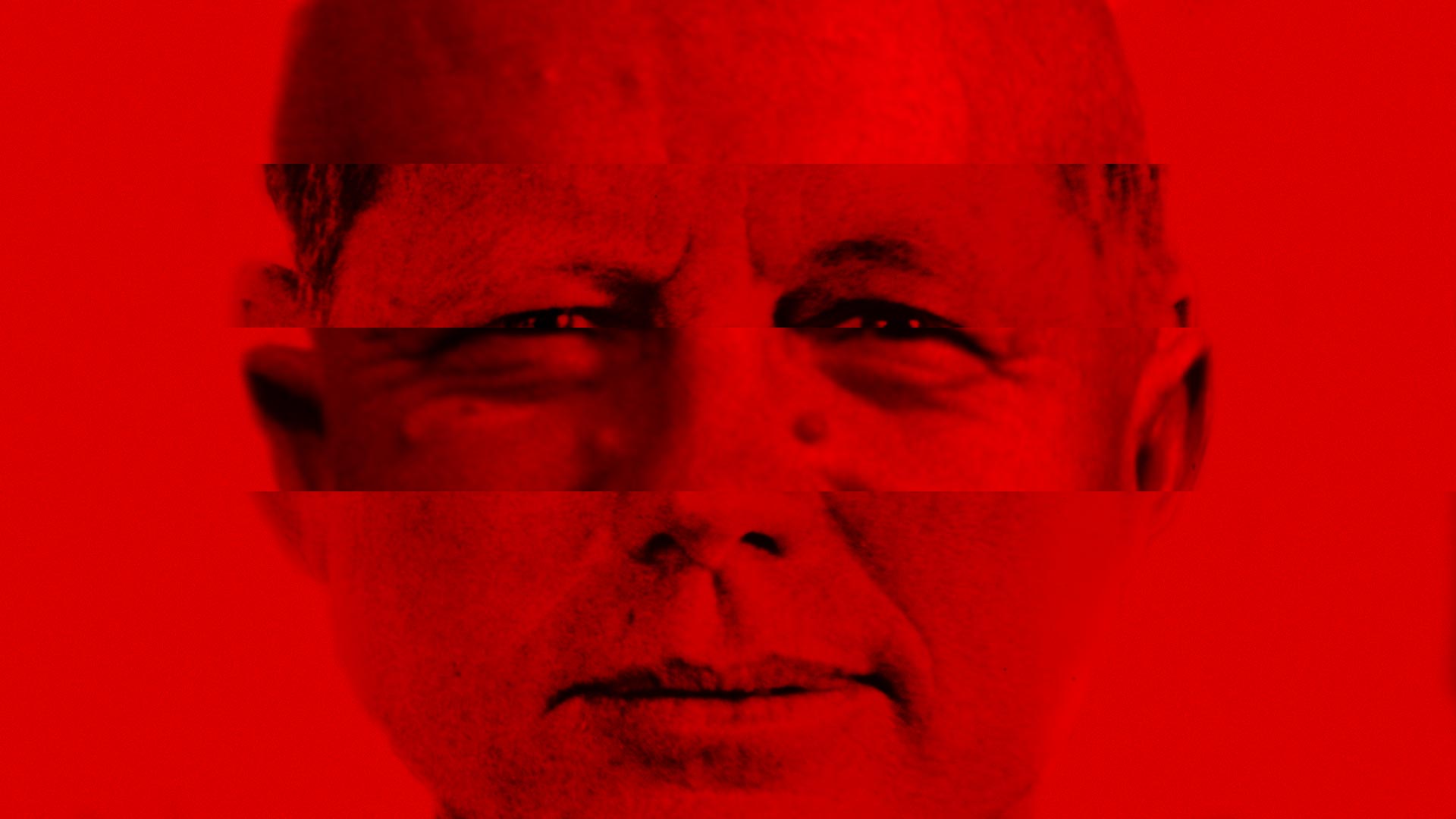 The first ten seconds of the Deepfake 1962 audio-visual recalled in my mind MissingNo from Pokémon Red and Blue, then a QR Code, then a familiar image of Chairman Mao Zedong appearing behind the translucency of a Minecraft creeper rendered monochromatic. My thought processes concerned a series of these colourful associations as the track built towards the drop at twenty-five seconds. Interested, I scrolled down to read the description on YouTube – then back up, only to be met with what I recognised as John F. Kennedy’s Lego-man haircut. When I close my eyes to channel the spirit of Philip K. Dick, I can easily imagine a deepfake John F. Kennedy AI running for office at the tail end of this century. Unable to invent a viable future in this century, are we on course to repeat the last one, do you think?

Xenomars collective: Deepfake 1962 is a retrospective. We didn’t think of futuristic implications, but let’s go there; it’s fascinating. Technically speaking, the first AI version would be just a tool to minimize human error from complex and sophisticated issues. Within a few decades, as the software becomes more popular, and consequently the trust in human decision-making diminishes, the AI may run for office. At that point, why not give it the reassuring familiar face of John F. Kennedy or Reagan for a Republican campaign? At first, it could be just a cosmetic choice, but two hundred years later, and technology merges further into our reality, what will be the people’s perception? We will enter into Orwellian territory. Big Brother had a face, but was he a real person? No, and even if there was such a person, we believe 1984 implies that person is probably already dead and his image used to project immutable power.

When it comes to cultural relevance of the ‘deepfake’, what’s particularly interesting to me is this idea of ‘depth’ that has been added to the essence of the ‘fake’ image. To say, the idea of fakery coming to possess a depth to it, of having more than one layer, of ‘going deep’ in the literal sense. No longer the naivety of good fakes anymore but the cultivation of deepfakes. Fakes no longer spoken about in terms of being good forgeries to reality but fakes spoken about in terms of their depth. In a culture increasingly concerned with its (in)ability to distinguish fact from fiction, reality from simulation, superficiality from depth, is it safe to assume these visuals are centering around both deepfake images and a deepfake history – or is the message simply that the manipulation of images is nothing new?

Xenomars collective: Like the majority of our works, Deepfake 1962 it’s satirical. But the underlying message is that the terminology and the associated technology might be new. Still, the idea that people might be deceived by technology is as sold as the first graffiti. How many books and paintings must have been created to project alternative realities? That’s how deep you could go at the time. With photography, surely you couldn’t fake reality. Now we know it’s as easy as clicking a button on your mobile phone. Xenomars’ video is an analogical work. Images were cut and recomposed purposely to create a sense of unease. We could have used something more blatant, but we believe the feeling of not recognising John F. Kennedy, Mao Zedong, and Nikita Krushev is more unsettling.

The implicit meaning of a text or image is still perceived as something ‘hidden away’ or covertly expressed by the artist when subtext has become increasingly obvious, rendered almost perfectly transparent, especially in popular culture. It seldom occurs to even the most media savvy audiences that such images might actually be appealing to emergent media literacies with today’s images consciously playing at fakery, deceit, double-dealing in subtext and so on, in a process that deliberately appeals to an audience’s ability to decode them. This seems to be the modus operandi of popular cinema where there’s an enjoyment of – let’s say – the Marvel Cinematic Universe, but only through a kind of ‘cool awareness’ that teeters on the edge of being ironic but never quite going all the way. I bring this up only because our last interview referenced occultism – in the sense of something being ‘hidden’. Antithetical to a culture of transparency then, is it right to say Xenomars works in the tension between what is being communicated (through these audio-visuals) and what is being deliberately hidden or made ambiguous?

Xenomars collective: Absolutely, you could go as far as mixing two random subjects and force the public to find a connection, and humans are genetically built to create patterns, even if they are not there. We believe that being too didascalic kills the imagination and becomes too subjective. Also, let’s not forget that the public’s imagination is much more powerful, irrational, and scary than the work itself. Think of John Carpenter’s The Thing, a masterpiece of primitive fear. There are also limitations in our work. We could utilise the same technology we are depicting, but then it would become the same thing and lose its evocative impact. With Deepfake 1962, we tried to evoke something primitive. In this, we were inspired by Andrew Bujalski’s movie ‘Computer Chess,’ one of the best movies on the subject of AI.

When a person leaves one layer of the simulation, they enter into another entirely, and it is in this process of leaving one simulation for another where we see the whole game of simulation sustained in the antithetical. To say, the highly politicised and mediated event of deepfakery emerging in the world today is only a part of a broader game of manipulation in the play of what’s real and what isn’t. Philosopher and cultural critic, Byung Chul-Han recalls this idea of a ‘Shanzhai Theory’, the proliferation of fake western brands in China for example as a paradoxical form of deconstruction that exists within the very framework of capitalism itself. In a similar sense, deepfakes could be considered partly deconstructionist in the way they actively recall the contrived nature of representations, asking audiences to remain hypervigilant of those manipulated images, especially as they relate to the depiction of something as politically-charged as world leaders. What’s particularly noteworthy about Deepfake 1962 – and perhaps Xenomars as a project – is this leaning towards deconstruction as a form of artistic expression. Is it right to assume this as an aesthetic founded in deconstruction?

Xenomars collective: Yes, it is always a deconstruction of social construct. And nothing is more fascinating to us than finding historical parallels rather than pop culture, a space that Slavoj Žižek exemplified too well with his documentaries on Hollywood cinema. In a sense, we are more Pythagorian in that “after certain specified periods, the same events occur again,” and nothing is entirely new. When you mention simulation, you are again correct. Deepfake 1962 it’s not an “it was” but a “what could have been like.” The message is, “forget technology.” It will always be a step ahead of your sense of reality. Instead, you should analyse the motives behind social manipulation, as they are always the same and leave a trace behind.

Xenomars collective: Probably the size of their image, we could say the same of Elvis Presley, Andy Warhol, and Marylin Monroe. All silver giants, untouched by the crudeness of digital TV. Today, social media makes it even worse; our leaders are constantly ridiculed because such is the demand for content that a faux pas is unavoidable. To the point where politics has become so comedic that even comedians at one point confessed they couldn’t keep up with it anymore. And that is very dangerous because it pleases our ego. Deepfake 1962 reminds you never to forget the tragedy mask of the people in power.

Xenomars – Deepfake 1962 available for a limited time in marketplace

Owners of ‘Deepfake 1962′ NFT will participate in Xenomars’ collective activities.

Stay in touch with Xenomars’ collective:

“I have always been open to writing any genre and style. I guess that’s why the Moonsama chaos methodology resonates… END_OF_DOCUMENT_TOKEN_TO_BE_REPLACED

Hidden away in a desktop file named ‘father’ in a studio overlooking the Adriatic sea, there was a lost, forgotten… END_OF_DOCUMENT_TOKEN_TO_BE_REPLACED