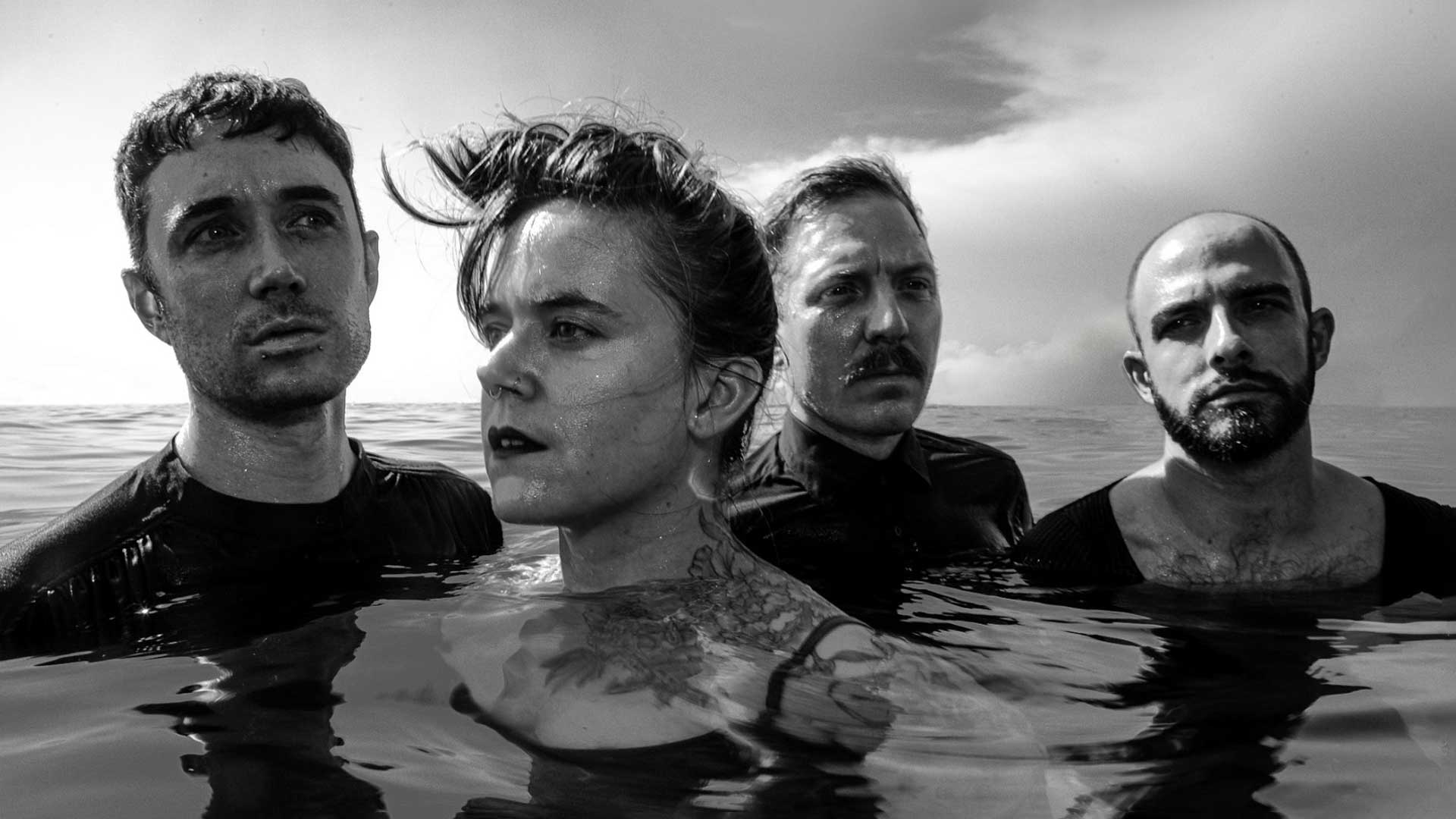 Ghosts are real in Justine’s world. Witness the front person of Chyldren elaborate upon their esoteric belief and discuss their songwriting process.

‘Everything we do is performance, or storytelling, to an extent. Access to the ‘true self is not something we decide or can even seek. It’s outside our reach.’ – Justine Nathalie Marzack, singer in Chyldren.

This is it. A return to new releases and live performances from Chyldren. Justine, how has the band spent its time away?

Justine: Like everyone else, we had to learn to live at a different pace, move in and out of grief, in and out of joy, in and out of love. Individually, each one of us has been quite busy. Jakkob and Dave released an album with their other band Abraham, entitled Débris des Mondes Perdus. Victor reaped the fruit of his hard work on his animated short film Death and the Winemaker. As for myself, I moved back to France, where I became a tattoo artist, and decided to go back to university to study creative writing. Chyldren was never on the back burner, though. We worked consistently to ensure that our new release would be impactful and that we would be ready for it. Rushing things has never been an option with Chyldren. Let’s hope we did our job well.

I’d like to address an anecdote you shared in your making of the video for the Cooper Lake promo. You spoke of being haunted alongside a friend of yours in a small getaway in New York. You mentioned ghosts. The spectres that haunted you and inspired the poem you read over the music, symbolic or real?

Justine: I do believe in ghosts. Yet I don’t think houses or rooms are haunted. I believe that when we are unwell, tired, and fail to face some realities, we tune ourselves to a frequency where we can sense and see scary things that seem malevolent. The friend I mentioned is Coco Karol, a dancer staying with me in this huge and weird mansion in the woods, over in the Catskills mountain. There is a saying: “once you’ve slept in the shadow of that mountain, (which is called, believe it or not, the Overlook Mountain… guess who got inspired by this place?), you’ll always come back. And somehow, Coco and I met there after months without seeing each other. Things got scary. Lonely. It felt like we could see the house as it was when no one watched it. So the ghosts are in equal parts, real and symbolic. I was haunted by my past, which turned me onto the strangeness of the house, land, and lake. I was obsessing over a conversation someone was trying to have with me. In this obsession that I had to refuse, I found that I was, in fact, the one really haunting myself.

How did you resolve the haunting, or was the realisation that you were in a private duel with yourself sufficient in granting you peace?

Justine: The realisation that I had become the perpetrator and the victim, leaving far behind the original reasons for the haunting, was a shock in itself, I suppose. And in response to that shock, I left my old narratives and ghosts behind. But then again, there is resolution in art making. The feeling becomes a poem, becomes a song, becomes a music video, becomes a piece of performance in front of an audience. And when you turn back, you can’t remember precisely how this feeling that seemed so strong now looks so minor and insignificant compared to the pride of creating something beautiful with it. I think that this cathartic aspect of writing appears in most of the texts I write for Chyldren.

We should focus on the music video, which borrows elements from Jack Torrent’s Overlook Hotel and the feeling of utter isolation in Robert Egger’s cinematic poetry, The Lighthouse. How important was it for you to stick to these two influences, and were there other choices that could have been suitably married to the music?

Justine: Victor and I bounced some references back and forth in pre-production. I cannot remember who mentioned what exactly. At the time, I was returning from spending the second covid lockdown on a remote island of the Hebrides for a work mission, so references to The Lighthouse were common in my vocabulary. A joke- but a recurring one nonetheless. Of course, The Lighthouse is about isolation. Still, it is also about libido, desire, and how destructive these forces can become in the presence of their counter opposites, such as boredom and fear. This tension between the Eros and the Thanatos is present in the music video for Cooper Lake. The figure of the doppelgänger definitely pushes this tension. These two films hold mirrors. Aesthetically pleasing but deeply disturbing. One of the most potent magical acts is to look someone in the eye, and there’s a reason for that. How do we withstand someone else finding out the truth about who we are? Can we stand to hold our own gaze in the mirror? But to answer your question, other filmographic references mentioned in pre-production were Night of the Hunter and some of Svankmajer’s feature films, such as Alice.

A scary facet of our existence is for someone to see you in ways you’ve denied to yourself. Suppose self-deception results from misunderstanding history and our mismanagement of its lessons. How do we confront the truth of ourselves discovered by those we’ve been granted access?

Justine: If there is a space where this vulnerability can be allowed to surface, and moreover, where this vulnerability must be brought to the visible surface of things, it is art. And it is the stage. The audience can tell whether a piece of work is heartfelt, whether a performer fills up their cup at the bottom of their personal well before bringing it to the public. There is no fooling an audience.

Nick Cave says: “you’ve got to understand your limitations. It’s your limitations that make you the wonderful disaster you most probably are”. And, you know, he’s a master at delivering incredibly raw and vulnerable material and performance, yet being very reserved and private outside his art and stage presence.

Art is undeniably a beneficial experience for communal science, and the merits of digging deep into oneself are a prerequisite for fulfillment. That being said, how much of Justine are we allowed to view in Chyldren? Is there a line you don’t cross?

Justine: The experience becomes a poem, and it’s the poem that interests me. The personal experience becomes secondary. I guess the line between experience and art is not the same for every artist. It’s up to each one of us to draw it (or not!) wherever we want and feel it’s appropriate. It’s up to each audience member to decide where they want to follow an artist. I think about Tracey Emin’s infamous bed: it’s still a mise en scene. She didn’t display her bed as it was on a day when she had just cleaned the bedding. There’s always a decision that is made. A story is always fiction; however, “true” or “autobiographical” it is supposed to be.

When did you discover the fiction of the self, and is that philosophy an ongoing task to remember?

Justine: It’s the ego’s job to keep us alive, and it takes its job very seriously. Sometimes it takes over, and things get tough, dire, and very personal! (Laughs) Anyway, I have a friend who is a great storyteller, and I have seen him tell the same story to different people. Over time, he smoothed the story’s edges, finding a way to make its voice the most efficient and most effective presentation. There was polishing in action, resulting in an economy of the narrative. The story was still “true”. It has still “happened”. But it had been fictionalised for effect. The narrative impact was prioritised over the minutia of details of what really happened. Witnessing it was very eye-opening for me. I spend a lot of time observing people, and it’s difficult for me to enter social interactions frontally, so I rather stay on the sidelines and listen and observe. I used to study anthropology for that very reason. And then I steal what I observe, and I write poems.

Cooper Lake has a meditative aspect, which uses the spoken word as the main feature. What discussions did the group have on its path towards a finished record that sidesteps vocal melody for atonal phrasing?

Justine: Almost none! I cannot remember there being much discussion. The song had its necessities very early on. I don’t think we’re really in charge all that much. We can only do our job individually as musicians, producers, mixing engineers, and mastering engineers. Why did that song need this atonal phrasing? This bass line? Who knows? Certainly not me.

Excellent stuff. Tell people keen to see you live on the 30th what you have in store. Hopefully, your Iron Man-like music glove tech will be present. Mind telling people what that is, as it really does conspire to place your live show in a unique space worth celebrating.

Justine: I love the mi.mu gloves and cannot wait to use them again soon. They are wireless controllers which allow musicians to remotely control any plug-ins live on stage with gestures. I use them for vocal effects, loopers, and sample activation. Unfortunately, for logistical reasons, I will not be able to bring them with me on stage at the Cylure in Lausanne on the 30th of September. The band and I will bring pure untamed energy and utter dedication to our audience.

Hidden away in a desktop file named ‘father’ in a studio overlooking the Adriatic sea, there was a lost, forgotten… END_OF_DOCUMENT_TOKEN_TO_BE_REPLACED

Brooklyn rapper Your Old Droog is replacing cultural figures at a rapid rate of knots in the shape of projects,… END_OF_DOCUMENT_TOKEN_TO_BE_REPLACED