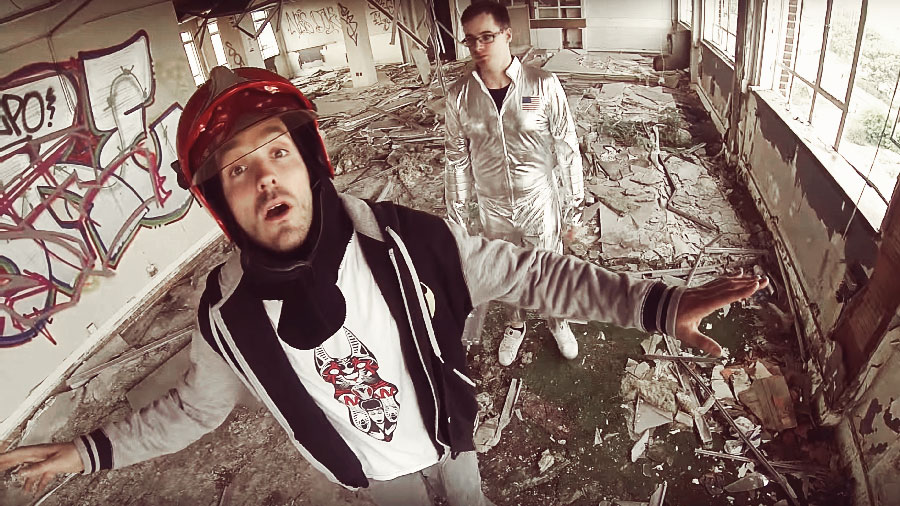 When I meet Dizraeli and Downlow at the Old Market Assembly in Bristol, there is an instant aura of slightly sleepy excitement surrounding them. It is the fourth date of the Leroy Merlin tour and, despite coming straight down from a crazy show at the Hootenanny, Brixton, the pair are nothing short of buzzing as they scan the venue, eagerly discussing the night’s show and reactions so far to the new songs.

Dizraeli and Downlow met in 2010 at a hip hop record shop in Brixton, which broadcast the radio station Sensei FM out onto the street. Downlow, a true scratch turntablist DJ, was “cutting and doing the whole radio DJ thing… This goes out to the massive!” The old school vibes drew in Dizraeli, who was looking for a band DJ. Upon joining the Small Gods, Downlow became part of an eclectic collective that fully embraced his turntablism, which even within hip hop is still very much its own niche world. Dizraeli & The Small Gods released their album Moving In The Dark in 2013 and later that same year came Everyone’s A Winner – The Mixtape, Dizraeli & Downlow’s first release as a duo.

Their new brainchild, the Leroy Merlin EP, contains three tracks and an intro, and sounds unlike anything within their hugely varied catalogue. They draw the old traditions, forms and traits of hip hop along with them but, as they point out, if you were to take the tracks out of the context of their show you’d be forgiven for thinking ‘What is that? That’s not hip hop at all!’ But that’s what makes it such an interesting listen and so exciting for the two artists to perform: “There’s not a single track that has a hip hop back beat. There are no snares on it. The only snare sound is a coin landing on a plate! It’s got a freshness to it that I’m really enjoying…and it’s fun to rap over as well!”

The EP was recorded in a directly three-way process with Nathan Feddo, one of the bassists from the Small Gods, and his influence along with his watery, thudding basslines float throughout the tracks, grounding them together. Other members of the Small Gods make subtle appearances as well (Bellatrix can be heard looped in the background of Dylan Thomas screeching like a vulture), along with members of Le Juki, touring buddies and psyche folk extraordinaires. Sound-wise the EP is a melting pot of various influences, drawing together different aspects of previous projects, and maybe most importantly something grown out of a musical family, “there’s so much collaboration between friends and so much mutual inspiration going on. Basically the community is part of the sound.”

On the topic of the elusive Leroy Merlin, the inspiration behind the EP and accompanying mixtape, the pair reveal him to be more of a mischief-maker than a musician, a wayward friend who has dropped in and out of their lives from an early age. Despite being credited as executive producer of the EP, it seems Leroy’s input was of a different kind: “Sometimes people can bring something as important without ever playing a note,” says Downlow, “Imagine him as Bez from Happy Mondays!”

“Bez, in a Brazilian carnival headdress,” chimes in Dizraeli, “flipping out to Boom Bap…”

Whether Leroy has influenced Dizraeli’s lyrical style is uncertain, but it has certainly evolved since the release of debut solo album Engurland (2009), where his writing was heavily observational, often focusing on character-based storytelling. Since Moving In The Dark, his work has become more intensely personal, drawing on the small details of life:

“How the lyrics progress on different albums is a little bit of a map of my relationship with myself as an artist. As you start out, you’re listening to classic hip hop and folk music and ballads, and you start out trying to imitate what it is you’re hearing. As you go on, you gain confidence with your own story. Hopefully that’s what we do as we grow as adults anyway. We start realising that actually I do have a unique story and a unique way of perceiving things and really that’s what I have to offer the world, my way of seeing things… So whereas my approach used to be ‘SAY THE MESSAGE’ and try and bring in as many well-researched facts as possible, or try and make it as realistic as possible but about someone else, my approach now is just to tell my story and, through the details of my life, I hope that people can find resonance and poignancy in the details of their own. Because I think that’s quite a powerful thing to pass to people: the feeling that what they’re living is significant, and not only significant but divine and sacred… These are stories worth telling.”

When it comes to putting these stories to music, they describe the process as pulling together individual fragments: “All of those lyrics were already floating about from stuff we’d been tinkering with, and then we jam it out in terms of melodies.” They point out that all the recorded versions heard on the EP have been played live, jammed out and recorded there and then, giving a homemade live feel. In order to create the initial Leroy Merlin mixtape, the pair, along with Nathan Feddo, went away to Cornwall and the four EP tracks grew out of that. “It was nothing fancy,” says Downlow. “Just us in a living room, recording.” “We don’t have a label,” continues Dizraeli. “It’s just been fully us off our own backs. There’s no money aside from what we make from gigs. I’ve been doing music seriously since I was 16. I’ve been on a label for one record [Moving In The Dark]. You get used to doing things your own way. It gives you a lot of freedom, but it gives you a lot of restrictions as well. And it’s a fuck of a lot of work! Yeah so we’re DIY. Not necessarily through our own choice, but we’re used to it!”

As it is for most artists these days, touring and gigs like tonight are the pair’s key source of income. The Leroy Merlin tour is the duo’s first back in the UK after an extensive period touring and building a following in France: “The whole hip hop culture in France is so vibrant,” they enthuse. “They still love scratching, all that traditional stuff, they seem to really dig it!” But with Britain now in the process of leaving the EU, its an uncertain time for touring artists: “I really hope that we’re gonna be able to continue touring with as much ease as we do in France. It’s really important creatively and a really important thing for us because they love their hip hop there. They love their turntablism there. We definitely do more and bigger gigs in France than we do in the UK by a long way. It’s a scary prospect! Hopefully there’ll be a way we can continue to do it… It’s so important as artists to see how people do things in different places, have contact with artists and different ways of treating culture. They have such a respect for culture in France, in a way that culture is disregarded in the UK.”

However, the pair show more optimism when discussing their upcoming projects. Downlow’s first producer album, featuring several different vocalists including Dizraeli, “at least one track came out of one of those sketch sessions with me and Nathan… it parallels what we’ve done on this EP. There’s also a soulful track with Cate Ferris, and a Le Juki remix featuring fellow scratch DJ’s dropping their verses.” Dizraeli also has a new solo album in the works “in a similar vein to Engurland in terms of how it’s made, in terms of I’m doing almost all the instruments and vocals myself and I’ll be producing it myself this time. That’s going to be finished in June and realistically be dropping at the start of next year.”

Tonight, as the show begins, Dizraeli and Downlow take to the stage accompanied by a slightly terrifying polystyrene bust of Leroy wearing his coveted headdress. After taking us through all-out boom bap, spoken word and everything in between, they pause in order to dedicate the next song to Leroy, their dear friend, who sadly could not attend the show. Dizraeli pulls out the bottle of Havana Club to which he clung throughout our chat earlier. It seems Leroy had requested that, in his absence, it should be passed around the room in order for each of us to reflect on our absent friend. He asks that we pass the rum to someone next to us we do not know and, as we do, greet them like a dear friend. As the bottle is passed around, the crowd evolves from the standard head-nodding hip hop crowd into an ocean of hugging limbs and warm smiles. I even get an over-sloppy kiss from a very wasted farmer. He may not have made it to the show, and he may not have played a single note on the EP, but Leroy, with his unifying powers of love and liquor, certainly brought together this room of humans.

Find out more about Dizraeli & Downlow:

When picking a due diligence data room, it is important to pick one with advanced digital rights management and data… END_OF_DOCUMENT_TOKEN_TO_BE_REPLACED

The world as we know it has ended. A nuclear conflict has virtually obliterated human life from planet earth. A… END_OF_DOCUMENT_TOKEN_TO_BE_REPLACED

“Women represent over 50% of the population in Brazil, and if motorcycle-riding former army captain Bolsonaro, is to have any… END_OF_DOCUMENT_TOKEN_TO_BE_REPLACED