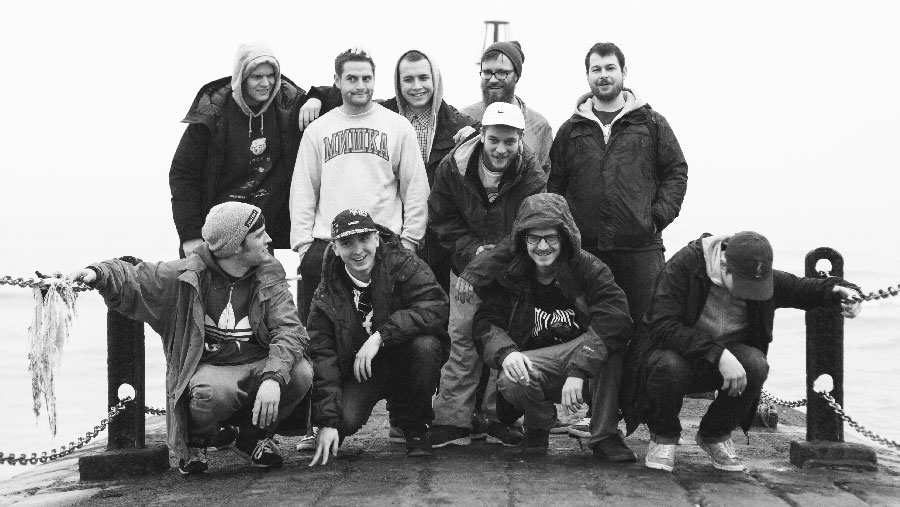 With the recent landmark of Yogocop Record’s first full length album release, Benaddicts The Garden Of England, we decided what better time to get to know the label a little better. Going strong since its early days in 2012, beginning in illiterate’s basement in Brighton with a group of like minded musicians looking for a platform with which to release their music, Yogocop have gained well deserved notoriety for steadily building and releasing their own home-grown brand of UK hip hop. We’ve chatted previously to Benaddict and NuphZed, so lets check out the other Dreebers lurking in the Yogocop vaults with a selection of Public Pressure’s favourite picks from the YGC Youtube and Soundcloud channels…

You should really already know these guys… Brightonian crew consisting of phenomenal MC’s Awfer and illiterate. Released their debut Painting On Silence in 2012, at the time also including the brilliant Frankie Stew, who has since left the crew to follow his solo path with producer Harvey Gunn. Painting On Silence instantly became a UK classic; a head-nodding, chilled and reflective offering teeming with deep lyricism and jazzy beats. There’s been whisperings of a Joe Corfield produced EP out soon, which we couldn’t be more hyped for!

Recently announced as the second debut to be released by the label very soon is Yogocop regular Mr. Slipz. Having produced tracks for pretty much all the labels artists and a huge variety of other UK rappers, it’d be safe to expect some killer features on the upcoming album.

Rapper and producer, put out the mostly self produced The X-Brain Yo-Yo Tape last year. Wundrop brings a whole different palette to the Yogocop table, eerie electronic noises and sinister creeping beats form the perfect backdrop for his lyrics. There’s a release with Kemastry in the works, the Frosty Jacks fuelled project Frosty Raps, and is also working on TRI.SUS.MI project with NuphZed & Kemastry, sure to be one for the ravers.

A producer who has been with YGC since the beginning, Cloud 9 can be found all over the labels early releases, playing a vital role in building the Yogocop sound and family. Released the collaborative project The Cloud and The Clown in 2014 with fellow beatmaker Hank Hiller.

The other half of The Cloud and The Clown project. Hanks dusty breaks, and jazzy soul samples are another staple in the chilled vibes the label has never had any trouble bringing to the table.

Another of Yogocops regular producers. Check Bo for jazzed out hip hop beats mashed up with obscure film samples and references.

Hazy, chilled out beats with a healthy dose of funky flavour.

DJ, turntablist and producer, Tom Yum’s dancing fingers can be heard cutting all over Yogocops offerings.

Stay in touch with Yogocop Records:

“I have always been open to writing any genre and style. I guess that’s why the Moonsama chaos methodology resonates… END_OF_DOCUMENT_TOKEN_TO_BE_REPLACED

Hidden away in a desktop file named ‘father’ in a studio overlooking the Adriatic sea, there was a lost, forgotten… END_OF_DOCUMENT_TOKEN_TO_BE_REPLACED