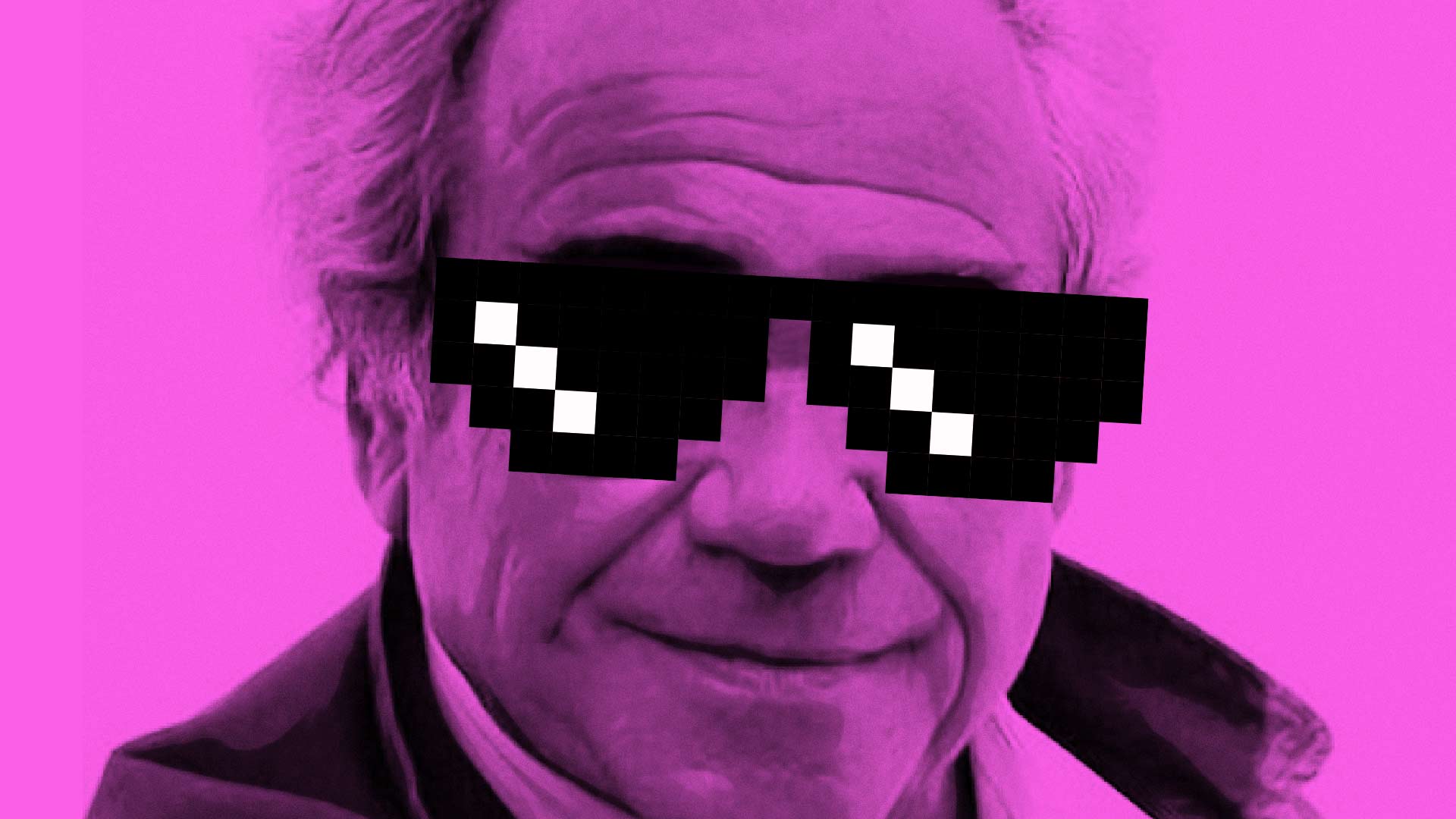 Are you an artist? I make memes. Oh, so you’re a philosopher.

Many of the quotations which appear in these memes were taken from Jean Baudrillard’s essay On Nihilism, which can be found towards the end of Baudrillard’s Simulacra and Simulation – that’s page one-hundred and fifty-nine in my copy.

The character on the left side of this meme is an intuitively reasoned Baudrillardian who drinks low-calorie Monster Energy and listens to Bladee. ‘Should we be scandalised? No. There is nothing immoral here.’ Baudrillard writes in Transaesthetics, an essay which can be found on page fourteen of The Transparency of Evil. Here, Baudrillard concludes: ‘It is often said that the West’s great undertaking is the commercialisation of the whole world, the hitching of the fate of everything to the fate of the commodity. That great undertaking will turn out rather to have been the aestheticisation of the whole world…’ However, we should also consider the liquidation of what Baudrillard calls ‘real value’ within the aesthetic realm. ‘In the aesthetic realm of today, there is no longer any God to recognise his own. Or, to use a different metaphor, there is no gold standard of aesthetic judgement or pleasure.’ Aesthetics becomes an unexchangeable currency in reference only to itself. ‘By its liberation of form, line, colour, and aesthetic notions – as by its mixing up of all cultures, all styles – our society has given rise to a general aestheticisation: all forms of culture – not excluding anti-cultural ones – are promoted, and all models of representation and anti-representation are taken on board.’ Likewise, could we consider the hauntological (anti)representation as it appears in art and culture today as the aestheticisation of absences?

Within the endlessly accelerative attempt to defer and reproduce an outside to itself by way of its own bipolarity, these aestheticisation processes, which is to say the aesthetic form therein, become as metastatic as our economies. In the essay on Transeconomics, Baudrillard concludes: ‘We are now governed not so much by growth as by growths. Ours is a society founded on proliferation, on growth that continues even though it cannot be measured against any clear goals. As an excrescential society whose development is uncontrollable, occurring without regard for self-definition, where the accumulation of effects goes hand in hand with the disappearance of causes. The upshot is gross systemic congestion and malfunction caused by hypertelia – by an excess of functional imperatives, by a sort of saturation. There is no better analogy here than the metastatic process in cancer: a loss of the body’s organic ground rules such that a given group of cells is able to deploy its incoercible and murderous vitality, to defy genetic programming and to proliferate endlessly.’

‘…we too are irrepressible creators of images, but secretly we are iconoclasts – not in the sense that we destroy images, but in the sense that we manufacture a profusion of images in which there is nothing to see. Most present-day images – be they video images, paintings, products of the plastic arts, or audiovisual or synthesised images – are literally images in which there is nothing to see. They leave no trace, cast no shadow, and have no consequences. The only feeling one gets from such images is that behind each one, there is something that has disappeared.’ – Jean Baudrillard on Transaesthetics, an essay taken from, The Transparency of Evil.

My next book Sad Boy Aesthetics is out later this year (June, 2021) with the award-winning Broken Sleep Books.

Through the precession of simulacra, we have arrived at a landscape of e-girls and sad boys, the aesthetic values of our time transposed onto the ecstatic communications of the hyperreal. Through Baudrillardian analysis, Alex Mazey attempts to trace a genealogy of Sad Boy Aesthetics, charting its earliest occurrences to progenitors like Yung Lean and Bladee, before moving towards more connective and investigational readings of Lil Peep.

‘Sad Boy Aesthetics shares with its reader the casual nihilism of a party that never wants to be over, even though it really should have ended a long time ago. Nausea and vertigo become new forms of ecstasy. The glossy surfaces of this world are alive with distorting scratches and reflections. There is in Mazey’s exploration of this hedonistic despair an equally desperate desire for it not to stop.’ – Ken Hollings

“I have always been open to writing any genre and style. I guess that’s why the Moonsama chaos methodology resonates… END_OF_DOCUMENT_TOKEN_TO_BE_REPLACED

Hidden away in a desktop file named ‘father’ in a studio overlooking the Adriatic sea, there was a lost, forgotten… END_OF_DOCUMENT_TOKEN_TO_BE_REPLACED