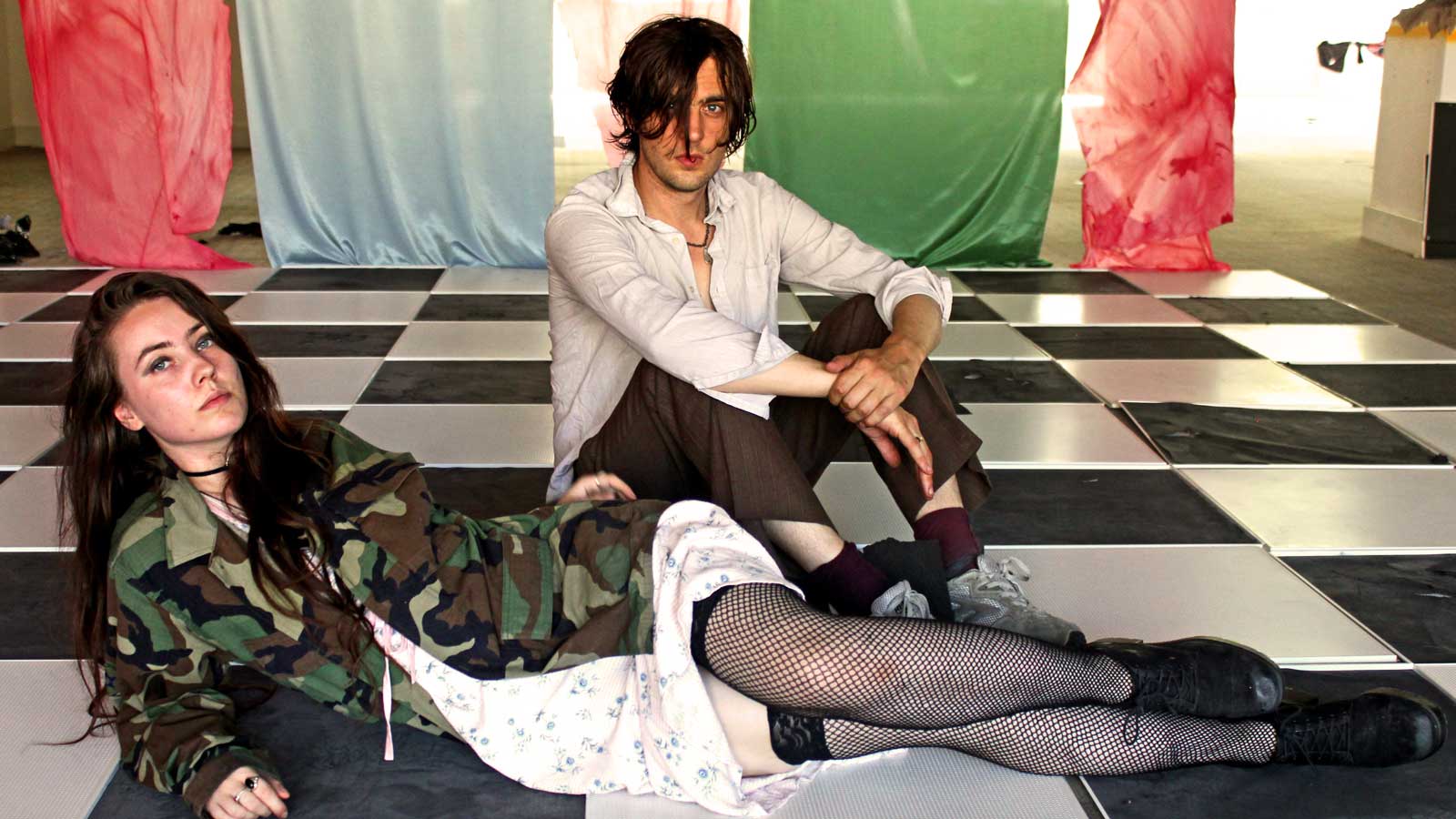 I circle the giant chess board in awe as Matt Prichard gives me a walking commentary. “There was a lot of upheaval. We had builders in, just drilling. Obviously this place is gonna be redeveloped at some point, so they came in for two weeks just going at the walls and everything, apparently testing for asbestos. But as you can see, they took all of these office ceiling tiles down, and there was a big pile in the corner. We looked at them, and just by chance noticed that one side is black and the other side is white, so that gave us our floor.”

I’ve been to this place before – an abandoned floor in a Brick Lane office block that Matt and his Sex Cells bandmate, Willow Vincent, call home – but the chess board is an exquisite new feature. It would provide the setting for the Youth Club Disco music video, a song which Matt describes as a reference to those “crappy discos at school,” where the boys and girls would stand on opposite sides of the floor without entering the middle.

“The point was to get rid of that separation in the video,” says Willow. “It’s a boy and a girl both going across the board. They’re going wherever they want and doing whatever they want, as opposed to being really static and trying to be cool.”

This kind of behaviour is not exclusive to school discos, however, as Matt disdainfully reveals that many of the fans at gigs they have been to are similarly uncooperative. “You get a lot of the same thing going on – people standing at the back. Thankfully not at the gigs we’ve been playing. It’s not so gender specific, but kind of the same thing.”

Willow adds: “And I think we’d noticed that a lot of people were quite apathetic, and thinking more about their own image than actually enjoying themselves. Sex Cells is very much about liking what you like or enjoying what you like, and not being afraid to express it.”

Matt and Willow are part of a London Underground music scene that is breaking down the barriers between performers and audiences. They run the Pretty Ugly performance nights at the Off The Cuff bar in Herne Hill, and see first-hand how this kind of interaction is being embraced, as Willow explains: “There’s a good energy at the moment with bands and audiences. There’s a lot of little factions that, even though they’re all doing their own thing, seem to be sharing this spirit that is quite exciting at the moment in London.”

Enter Matt: “And then you’ve got the Fluffer pit parties, which we haven’t played at but we go to them. I guess they directly challenge that audience-band separation. They’re basically in warehouses around East London and the band are just in the middle. There’s no stage. The crowd are literally amongst it – circling. It’s a great atmosphere, you know. You feel less like you’re going to stand in front of a band and go ‘Okay’.”

I ask them how their own live performances are going down with audiences. Matt seems positive: “People are dancing, which is good. And you can’t make people do that. We can’t force them to do it. It’s a nice reaction.”

Sex Cells are continuing to gig around London, and the builders have since left the Brick Lane building (AKA ‘Nightmare Hall’). “We really like how the builders have destroyed our room,” says Willow. “Sex Cells’ presence in Nightmare Hall feels more permanent now and it can’t be taken from us, because there aren’t many people who would want to live in a room where there’s ripped-out ceilings, columns that have been destroyed and dust everywhere. It feels like it’s ours for the foreseeable future.”

Find out more about Sex Cells: