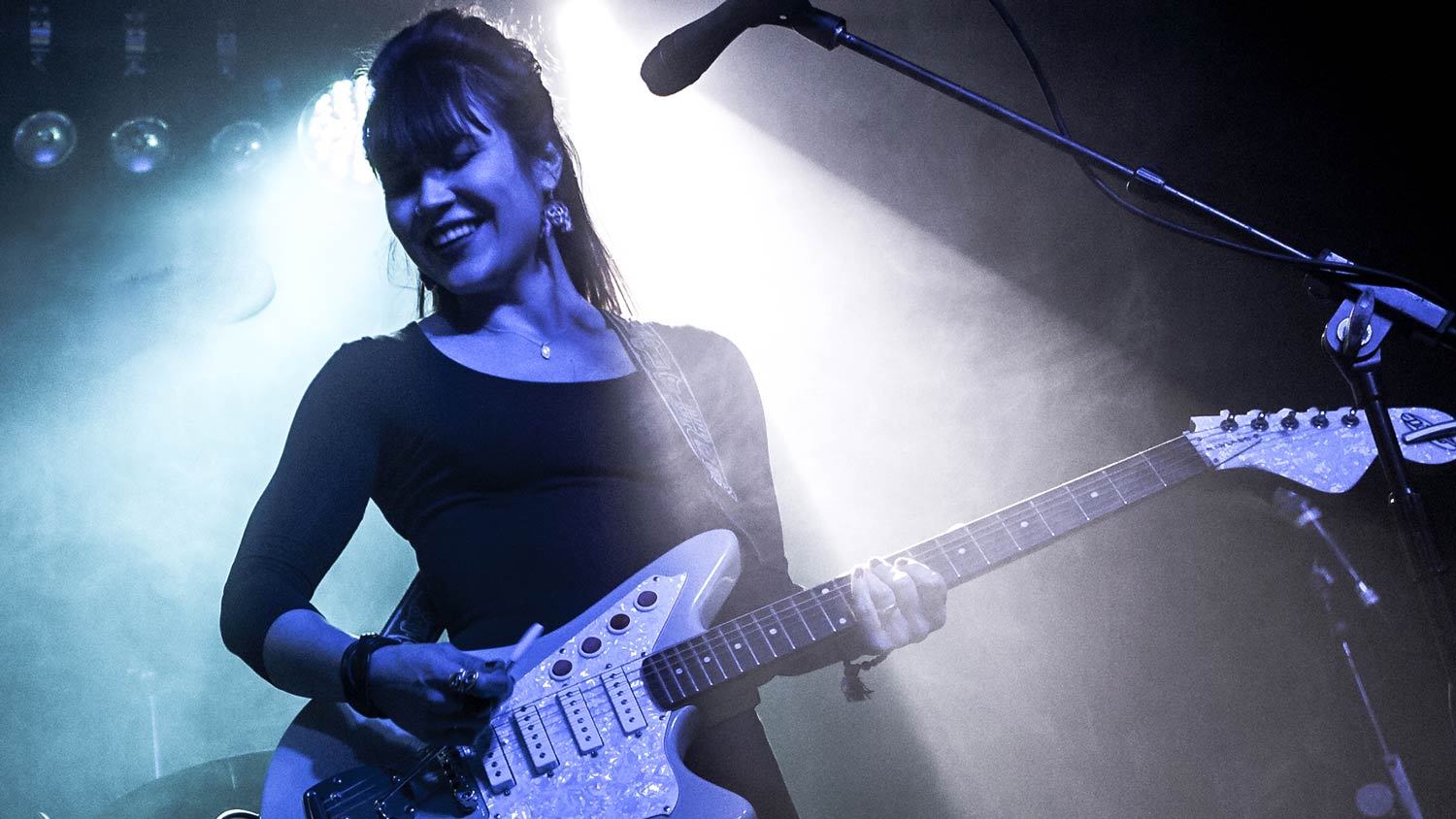 Muertos talk to Mark Burrow about their roots and sound at their last live gig at The Finsbury for Blogtober Music Festival.

De Avis: We’re all gonna have different opinions on that, because we’ve all got really different influences, but like, Marc and I started off writing music just in his front room, so like, I don’t know, we were just messing around with two guitars, no bass, and a little drum machine. And then obviously, we decided it’d sound better with an actual human, so.

De Avis: Like, I mean, for example, I guess I was quite into Riot Grrrl before this, so this is probably a lot less angry-sounding than my previous bands. Which has been really nice, to play something a bit more chilled out and spacey. And I listened to loads of PJ Harvey, like White Chalk especially before starting this band, so I think that influenced the vocals to an extent, but it’s obviously changing all the time.

Marc: I think there’s a lot more, kind of, atmosphere in this music that we talked about with our other bands and that was kind of one of the things we wanted to get across in our songs.

De Avis: We always think of, like, a kind of visual scape for everything that we’re writing. We have like, yeah…

Marc: And it quite naturally just went to a dark kind of tone, as well. Like every song we was doing ended up having quite a dark sound to it as well.

De Avis: I guess not consciously, but I mean it’s undoubtedly going to be in there because I’ve played Mexican music my whole life, so since I was literally three, I started playing music. And I think one of the things that might be kind of related to that is they do lots of harmonies, so I always did harmonies like on the violin or harmonies in the vocals, and it teaches you just how different kind of notes relate, and I think that we always bring that into our music. We like to have a combination of leads, really.

Marc: My wife is Mexican as well, so it kind of flows into…

De Avis: He just collects them, he’s a weirdo.

Marc: I just said I’ve been surrounded by Mexican things, I guess you can’t help being influenced in your music, as well.

De Avis: It translates as “the dead,” so it’s the last part of Día de Los Muertos and I mean, I think it…yeah, it does… We picked it because it suits us perfectly, because we’re all obsessed with morbid… well, not all of us, I think it’s… you’re less morbid than us.

Marc: He’s the light in the band, we appreciate the light.

De Avis: Yeah. We just sometimes write a love song, honestly. I think it’s quite balanced. We write some heartfelt stuff, but we’re exposing our own tortured psyches.

Marc: Yeah, and sometimes I quite like the contradiction of things sounding quite upbeat and then the lyrics are quite dark and stuff. We read a lot of Stephen King and things like that.

De Avis: So many people who are like really talented musicians and they can play guitar far better than I can play guitar and they can sing and all this stuff, but they’re just too scared to get out there and do it. And I think it actually doesn’t matter how shit you are or how polished or anything like that. Like I really love the whole, you know, like the kind of scene around Seattle and Olympia when they had like, the whole DIY thing going on with K Records and Kill Rock Stars and Beat Happening and all of that.

I think it’s been awesome because it’s taken away all the headache of being in a band which is normally, like, spending hours on band admin trying to book gigs and just deal with that side of things. So I mean, it lets us just get away with, like, just focusing on creating stuff. And I think the other really cool thing is that it’s really nice to have an outside perspective who believes in you, and they’re with you on this journey. I think that that helps sometimes, and also an outside opinion. When we write a song we’re like, “Does this sound good? Does that sound shit?” And then it’s just like, you know, some feedback.

Marc: Yeah. For someone to kind of, actually be that interested in, like, your band, to kind of wanna be part of it, it was…

De Avis: It’s good to be part of the gang.

De Avis: No, it was really strange. I think we were in a weird part of town, and there was like…there was this Oxjam Festival going on across the whole town with six different venues, and they had constant bands on. And I think that there was loads of musicians around, but I don’t know how many people were actually out because it was quite spread. So we did find a really cool street with the Caribbean bar and a little
dime… What’s it called, The Dime Bar that’s got like the little ales and stuff? So they had some good restaurants and things, but I would like to see the music scene when it’s not on such a crazy, spread out day.

Find out more about Muertos: