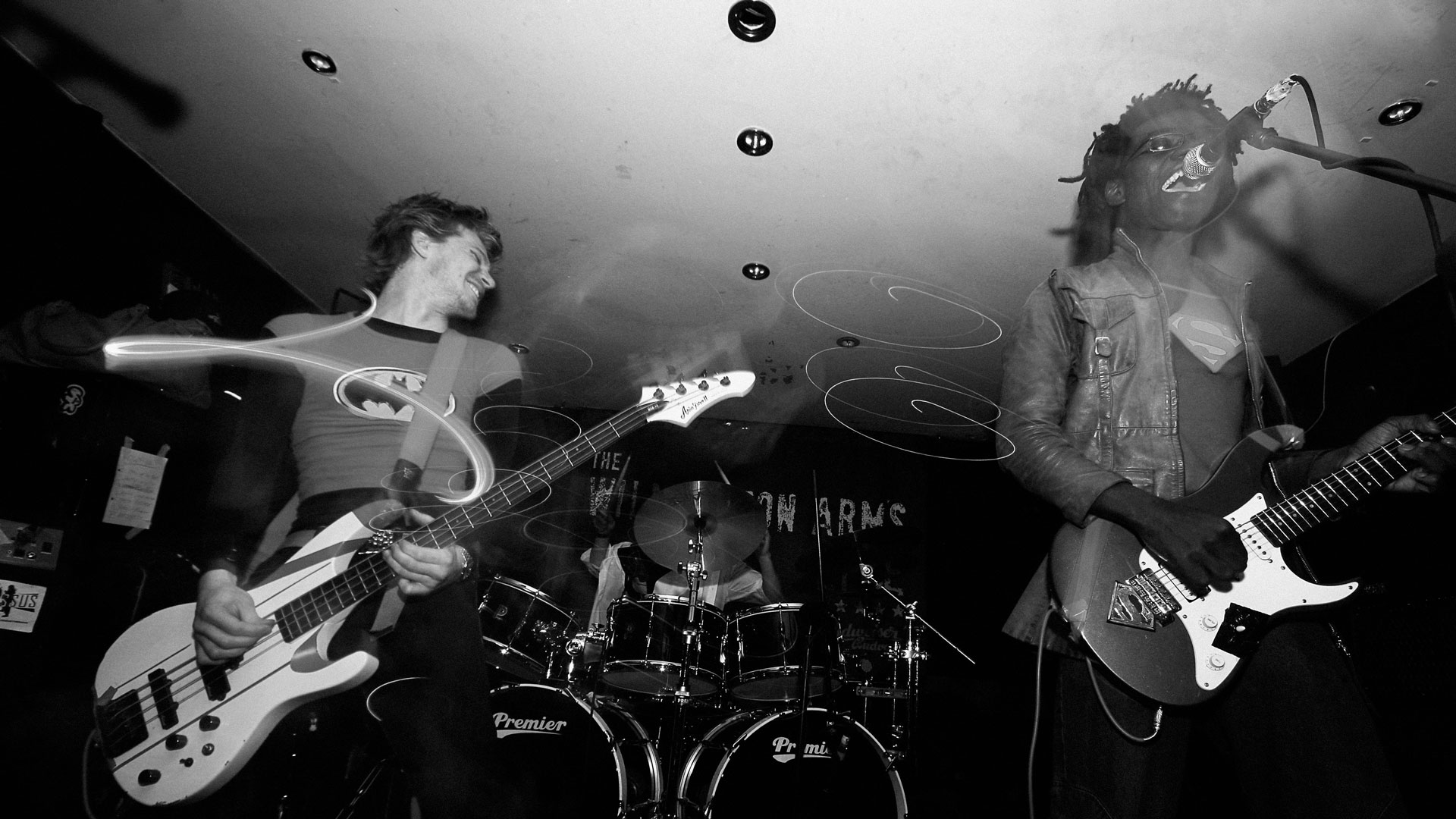 Almost a decade ago, Colossus disappeared. Their guitarist John Clay went into a world of journalism and filming, becoming a true protagonist of London’s alternative scene and bassist Rob Homewood went into software development with love for computational art. They’re back, still as superheroes, but now with the mindset of sculptors and archaeologists. What has changed in the music industry since you returned?

Wow, where to start? I think culture has realised our collectivism which wasn’t there before. Back then, you had to use hype to promote a band, creating a buzz and your success, you had to do a lot more spin. Now bands have become their own promotional vehicle with other bands – these days, you seldom see an A&R person at a gig for one band, they go to see three or four at the same venue, and that kind of culture wasn’t there back then.

From 2004 to 2009, the London culture scene depended on hype. Then 2010 to 2011, bands like Fat White Family started to gravitate towards people’s attention – coming from a kind of squalid culture where people had shared experiences. Their music is an expression of that.

Rob: I think the reasoning behind this change is the whole punk rock guitar music scene was starting to die in a state of constant attrition. We were pushing, pushing, pushing as hard as we could but the infrastructure around us was crumbling. Things haven’t become magically better but the expectation that guitar music is the most important thing has gone. We’re not coming into this saying we want to be the best band in the world – we simply want to put out good music. These music communities that are popping up are an extension of this. Smaller communities, more meaningful, deeper connections between artists and fans.

When did Colossus first form?

Colossus has three distinct periods; first, when I was in the band with my dad, who taught me everything I know. Then 2004 onwards with Rob Homewood – we met at a call centre selling Sky Television and instantly got on and had great conversations about music. After I got fired from my job, we both ended up sharing a flat in Camden, living off apples and water. And now – our reunion, putting out a lot of material and having fun with it.

There’s enough material for the next 15 years! But I don’t see it as ‘old’ material as it has never got out there. Now is a great opportunity to say this stuff exists. Check it out. We want to get this material out there, but at the same time, creativity is in our blood, so it’s also exploring new material – a bit of column A/column B. Getting our new single, ‘Sharp As A Knife’ out there feels like it actually exists now, giving it firm meaning and making it part of your psyche into the world.

Having this much material isn’t healthy!

You describe your new single ‘Sharp As A Knife’ as “existential party music you can bop your thinking head to.” What inspired the song, and where this quote came from?

We’ve got a unique sense of humour but also talk about lots of deep philosophical stuff. I’m proud of celebrating the witticism of a certain person I’m enamoured with, and I guess that’s where the quote comes from – there is a certain investigative nuance to it.

Rob: I just want to add it was very late at night when we wrote that!

We still have a strong songwriting partnership. The other day we wrote a song inspired by a Marilyn Monroe documentary, and I found myself writing about how certain aspects of her life were controlled by men. It was a statement I wanted to make, and suddenly, I had a tune in my head – two hours later, we had it written and recorded the track. Oh, and the song title has nothing to do with Edward Scissorhands!

Who is that enamoured person?

Wow, I didn’t expect this to come up! Let’s just say it’s written for someone who is no longer in my life – a retrospective.

Ok, guys, what is it with the superhero t-shirts?

I’m fine with being a nerd, in fact, geek culture has now caught up and it’s become mainstream. Back in our, apples and water, loving the bromance of being in a band days, I bought a Superman t-shirt and wore it on stage and then decided to collect the rest, belt, boots etc. Laundry days are amazing – an array of Superman outfits hanging out to dry.

I guess superheroes are glorified super police trying to maintain the status quo – yes, I’ve stopped the aliens, life on earth is going to be fine now! But uhm I’m not sure about that, maybe a more progressive superhero would be more beneficial?

My hot take – I’m anti-Superman, even though I’m wearing the f*cking thing!

Did the idea of getting back together come from lockdown?

During the lockdown, Rob stopped me from going insane when he sent me a file of my vocal exercises, my anti-kryptonite – without it, I can’t sing. I used to use these vocal exercises in the early days to power my voice and using it again, and I realised I’d forgotten that I was a singer! For years I’ve been interviewing bands about singing and realised, hey, I’m a singer too!

Rob: Forming Colossus again post-lockdown puts me in mind of Strange Fruit getting back together or when the guitarist from Motley Crue had to re-learn how to play the guitar. My bass guitar had been stuck in a friend’s attic for years and I had to get back into the process of routine practising. It becomes a mantra, growing, getting to where you once were and then going past that point, because you’ve moved on as a person. Your values and skills have changed, and your approach to self-betterment has changed.

What next, playing live?

Live is interesting, but it’s not the be-all and end-all of us wanting to sing and play again. We’ve now got the mentality of being sculptors. We like the idea of creating something and having it there for people to see, giving it a certain kind of life.

Rob: The energy of playing live is something we love but we’re more interested in putting something out into the world. We are sculptors and it’s a different world post-pandemic. The idea of going out more because you’re missing things is fading, the Zoomer generation’s default as they’re growing up is things being online, commoditised to a certain extent.

Playing live will always be sacred because it’s real, it’s there, and there’s something powerful about that but putting something into society, into culture, like a recording, is a nice artefact.

As well as sculptors, our mentality about our music is archaeology – we’re unearthing it and wanting to reveal it and not necessarily to make money.

Colossus, digging into the past to reveal the future!
Colossus will release a new single, ‘Strike Up The Band’ in November and will be playing live on Resonance Radio on the Hello/Goodbye Show hosted by Dexter Bentley on Sat 17th Dec.