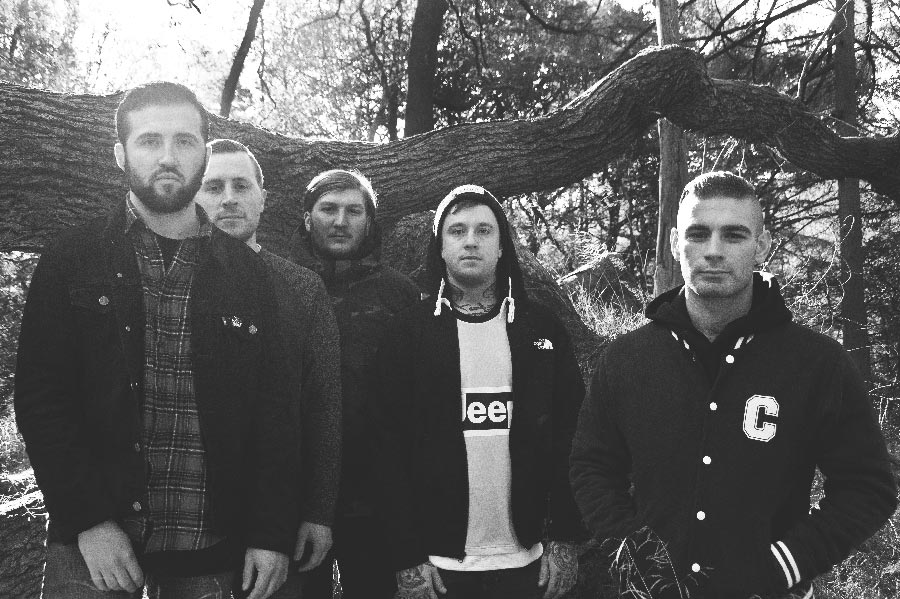 Following the release of their fifth studio album In Dark Places, Welsh hardcore band Brutality Will Prevail have been in the spotlight a lot, and with good reason. Numerous fans had been voicing their doubts about the upcoming new material after BWP’s previous vocalist Ajay Jones left the band under something of a cloud and was later replaced by Louis Gauthier (vocalist of Breaking Point). However, In Dark Places has undoubtedly surpassed a lot of expectations and has been described as a surprising “return to their roots” by many. I spoke to BWP’s drummer Marc Richards about his thoughts and experiences with the band’s latest release.

Marc explained that back in the band’s earlier days of 2010, much of the writing was done by himself and fellow band member and guitarist Nick Rix, and that this had also been the case when writing In Dark Places. Therefore, he says, it totally makes sense that fans might describe the new tracks as being more in line with some of their earlier material and BWP’s older sound.

Marc: “I mean, all bands seem to have some sort of changes but obviously a vocalist is always a pretty drastic change for any band. Nick has always been the one consistent member in the band and he basically writes 90% of the stuff we have ever done. I think our sound now is more like what we were known for back in the days of Root of All Evil, Sleep Paralysis and Scatter the Ashes. Me and Nick wrote those records mainly so it kind of makes sense.”

As well as being a nod to their origins, the actual subject matter of In Dark Places has been said to focus around the promotion of “unorthodox thinking”, as well as issues surrounding religion and self-doubt. I asked Marc what had motivated the band to base their new tracks on these kinds of topics and what exactly “unorthodox thinking” referred to.

Marc: “It’s just a lot of subject matter that we have always visited but never as hard as now. The lyrics are a lot less direct I’d say, and more open to the person on the other side to make up their own minds. As far as unorthodox thinking, giving it away would defeat the point I’m afraid.”

BWP’s latest music videos have also piqued a lot of interest, and offer some more insight into the dark mood and themes of the new album. In late December 2016, the band released the video for Forever Restless, intriguing listeners with its raw and heavier sound and its sinister gothic video. Next came the video for Penitence in February 2017, which was equally heavy and visually dark, garnering a lot of comments on Youtube from listeners who were happy to see BWP’s “return to form” and were enjoying the new vocals from Louis.

It also appears as if there is a linking story between the two music videos, which both share a lot of old-fashioned, colourless, jittery imagery of eerie woodlands, cloaked figures and bloody rituals, with Penitence acting as a kind of prequel to Forever Restless. It will be interesting to see if these themes continue into the next music video from BWP and where they will go with the rest of the album.

Marc: “We just wanted our imagery to match our sound and aim with this record, and that video hits the nail on the head. It’s a theme we seem to want to follow on as much as possible and we do that on the new video Penitence. The track is mainly just about throwing your energy into doing something you want to do. You only have so much time here and so much of that is wasted on pointless things you won’t remember. Use your time wisely.”

“We wanted to have the link and almost show you the origins of Forever Restless. We had the same people involved throughout and it’s easy to see the link. I wouldn’t say movies inspired it really. It was mainly just the idea in our heads mixed with some ideas that Tom Cronin brought about. A lot of the album’s process was working with friends, and Tom made it easy for us to accomplish the goal we had envisioned.”

Armed with a savage new record and a distinct media buzz around their name, it looks like Brutality Will Prevail are set for a great year ahead, if the reception of In Dark Places is anything to go by. Check out the new album here.

Find out more about Brutality Will Prevail: