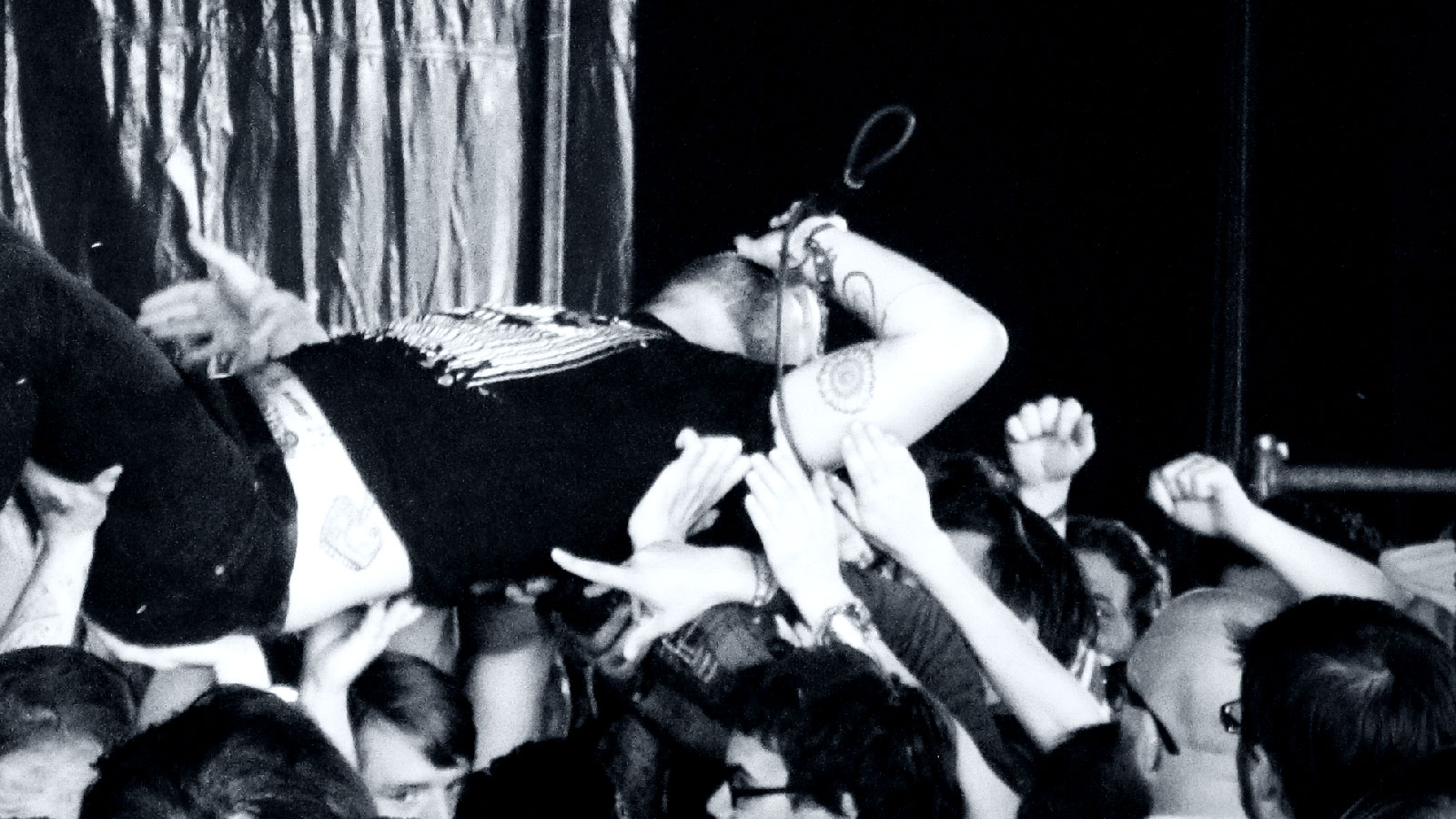 It’s a Sunday night in Birmingham. On one side of the road, hoards of overexcited prepubescent girls are going mental as One Direction take the stage at the Barclaycard Arena. On the other side of the road, The St. Pierre Snake Invasion are playing in the basement of an indie bar.

These two shows are not destined to be equally successful.

For 1D, the performance was always going to be a slam dunk. The crowd were so hyped in the lead-up to the show that the band could have done pretty much anything and still got a great response. It’s not quite the same when you’ve yet to release your first full-length album and you’re the final act at a poorly-attended pub gig. And it’s a Sunday night. And the mics are electrocuting you. And there’s an idiot screaming the same song title at you over and over again. Even when you’ve played it. And you’re ill.

When The St. Pierre Snake Invasion called it a night after just a handful of songs, it was hard to blame them.

It was definitely a weird gig: the three support acts performed most of their sets from the middle of the crowd, one of the singers almost got into a fight, and it was all over by half ten. And yet I’ll take this spontaneity, passion and conviction before an overproduced pop spectacle any day.

I got in contact with The St. Pierre Snake Invasion’s vocalist, Damien Sayell, who admitted that it had been a tricky night:
It was the last show of the tour, we were all really ill and very tired. I think we had just burned ourselves out physically. With all due respect to the venue, I couldn’t hear myself, Szack was getting electric shocks from the microphone and our amps had static interference. We all felt bad about our performance despite the small number of people there they had paid to see us. We apologised and hopefully they’ll see us again when we aren’t on death’s door.

The St. Pierre Snake Invasion may not have made any new fans this evening but there is plenty to like about the band. Their heavy sound is complemented by a (usually) fierce live reputation.  They’re foul-mouthed, have songs about the rubbishness of pop culture, and seem comfortable with living outside the mainstream. There’s a current of humour running through their lyrics and, even with the abbreviated set, it was clear that they were a musical step above the other acts on the bill.

I asked Damien about the incongruity of their playing at the same time as 1D on the other side of the road, questioning whether he could imagine The St. Pierre Snake Invasion ever being a stadium act:
You have to work like an absolute mule to get to that level so I have respect for them in that sense. On the other hand, you don’t get to there without a mass of industry backing and more importantly, a shitload of money being spent on promotion over a prolonged period of time. Genuinely, we’ll be lucky if we end up doing tours where 200 people a night turn up. We don’t ‘play the game’ enough. We don’t have an image, we aren’t cool, we aren’t good looking, we don’t lick other band’s arses, we aren’t punk enough for the punk scene, hard-core enough for the  hard-core scene or hip enough for the hipsters, we don’t have songs about girls, we don’t have songs about sex, and we don’t do the rock by numbers cliché crowd participation at our shows. If getting bigger meant having to dress or sound like Young Guns, who let’s face it are a boy band with guitars and tattoos then I’d rather stay unknown and be able to sleep at night.

They may not have a defined image but they obviously have a strong sense of their own identity as a band, a conviction that comes through loud and clear through their records and in person.  This new track from their upcoming debut album demonstrates this beautifully:

October 31st marks the release of A Hundred Years A Day.  The album has a raucous live feel, avoiding the hazards of overproduction through being recorded live at Rockfield studios by Reuben producer Sean Genocky.

On the recording process, Damien told me:
We had planned to do a four song EP but we ended up getting eleven songs done in three days. A lot of it comes from the fact that we didn’t use headphones or a click track. The album is literally us in a room playing live. Never say never and all that but I can’t see us recording any other way again.

With a launch event for the album in their hometown of Bristol, you have to hope that they are treated to a more responsive crowd and a less troubled evening than they received in Birmingham. They might not be commanding 1D levels of admiration just yet, but they deserved a more receptive audience than they got this time round.

When asked about upcoming shows, the practical side of the business came to the fore:
We only have a few dates booked. None of us have any holidays left to take from work so weekend shows will have to suffice.

It’s easy to forget but many, perhaps even most, of your favourite bands will still have day jobs, working in bars, offices, and who knows where else to fund their passion.  It’s not just the stadium bands who work bloody hard.  The St. Pierre Snake Invasion might not aspire to the arena lifestyle but their intensity, integrity and counterculture appeal should guarantee them cult status in the not-too-distant future.

Check out the new album on Soundcloud before the official launch.

Find out more about the St Pierre Snake Invasion:

Hidden away in a desktop file named ‘father’ in a studio overlooking the Adriatic sea, there was a lost, forgotten… END_OF_DOCUMENT_TOKEN_TO_BE_REPLACED

Brooklyn rapper Your Old Droog is replacing cultural figures at a rapid rate of knots in the shape of projects,… END_OF_DOCUMENT_TOKEN_TO_BE_REPLACED