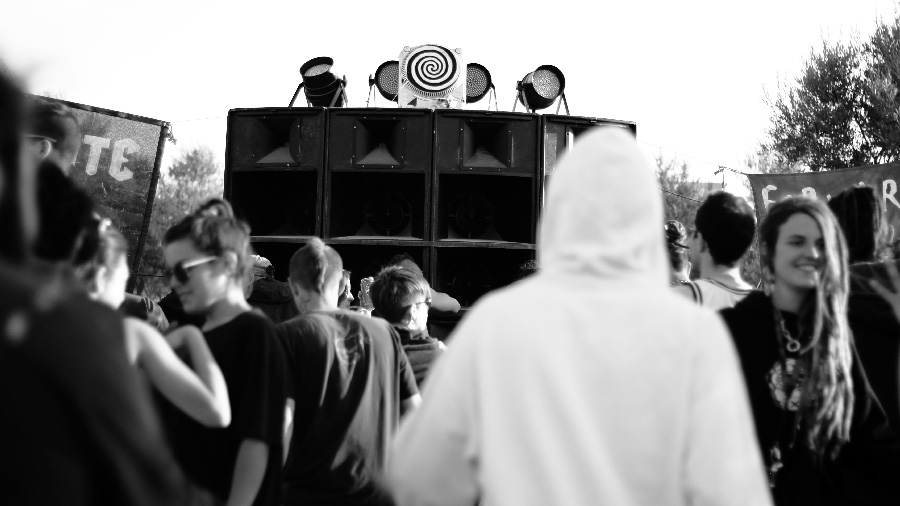 In France, people rarely hear about underground rave culture. You might glean something about prohibited parties in the Parisian catacombs, or whispers about drugs and alcohol at illegal rave parties, but what is the reality? What is the French techno underground?

I remembered a friend who had been involved in illegal parties; were those the underground raves people had hinted at? He told me how people organise “free parties” to militate against the control of the government and the system. But it turned out that he was just a participant, not a serious player in this world. Luckily, he was able to point me in the right direction, to the DJ and organiser of Teknival 2017.

Teknival brings together more than 60,000 people from all around France and Europe. When I contacted the DJ, we spoke for a bit but, after some days, the communication broke down. Tragically, there had been a fatality during Teknival, when a 20-year-old boy died. No surprise that the DJ no longer wanted to talk.

I was back at square one and had to start looking in a new direction. Eventually, my research paid off, and I was able to find another organiser, belonging to a sound system called RHT. For his security, we will call him Viking RHT throughout.

From talking to him, I realised how complicated it must be to organise this kind of free party. In terms of time, it can take from three weeks to many months, depending on the size of the event being thrown. The team can involve more than 50 people, all working together to get the venue ready and the word out. And with RHT arranging parties around Europe, it’s a subculture that keeps growing.

Regardless of where the rave is planned, there are a lot of steps involved. First, they have to find the right venue, somewhere far from inhabitants, with many exits and access for emergency vehicles. If they can find somewhere, they then have to prepare the venue and communicate the location to partygoers. Putting it out on social media risks arrest, so they created “Info-lines”, using secure cell phones to pass out information. Then the fun can start.

The music and styles are chosen by DJs who are generally members of the collective. They play every kind of electronic music. With his collective, Viking RHT organises one party a month. Each time the police interfere, he risks everything: takeover, a criminal record, months of judicial proceedings and fines. In 2011, the collective received a huge fine of €191,000 for one of their parties. After that, all the money they made had to go towards paying that off.

So why still continue? Viking RHT’s passion is the main motivation, to share with the people, to create a self-managed culture against commercialisation and marketing. He also wants to destigmatise drugs, working at the parties with associations who help to manage the risk. More than anything, he wants to show another way of living, against the rise of mass culture and commercial art, but for the equality and the respect of everyone.

Finally, Viking RHT shared some of his greatest experiences with me: dancing with cops, being congratulated by a town mayor and local residents, going to places like Bulgaria, Romania, and Slovakia to share his passion. It’s a vision far away from the tawdry tales of drugs and illegality that I had heard, focusing instead on the community that has been built and the shared experience of everyone who gets involved. The tragedy at Teknival might be what the public hears about these parties, but this fear misses some of the beauty of what is being created. As the scene grows and spreads, hopefully the facts can overtake the fiction, and the doubters will get a chance to experience this exciting world for themselves.

Check out some of the DJs here:

“I have always been open to writing any genre and style. I guess that’s why the Moonsama chaos methodology resonates… END_OF_DOCUMENT_TOKEN_TO_BE_REPLACED

Hidden away in a desktop file named ‘father’ in a studio overlooking the Adriatic sea, there was a lost, forgotten… END_OF_DOCUMENT_TOKEN_TO_BE_REPLACED