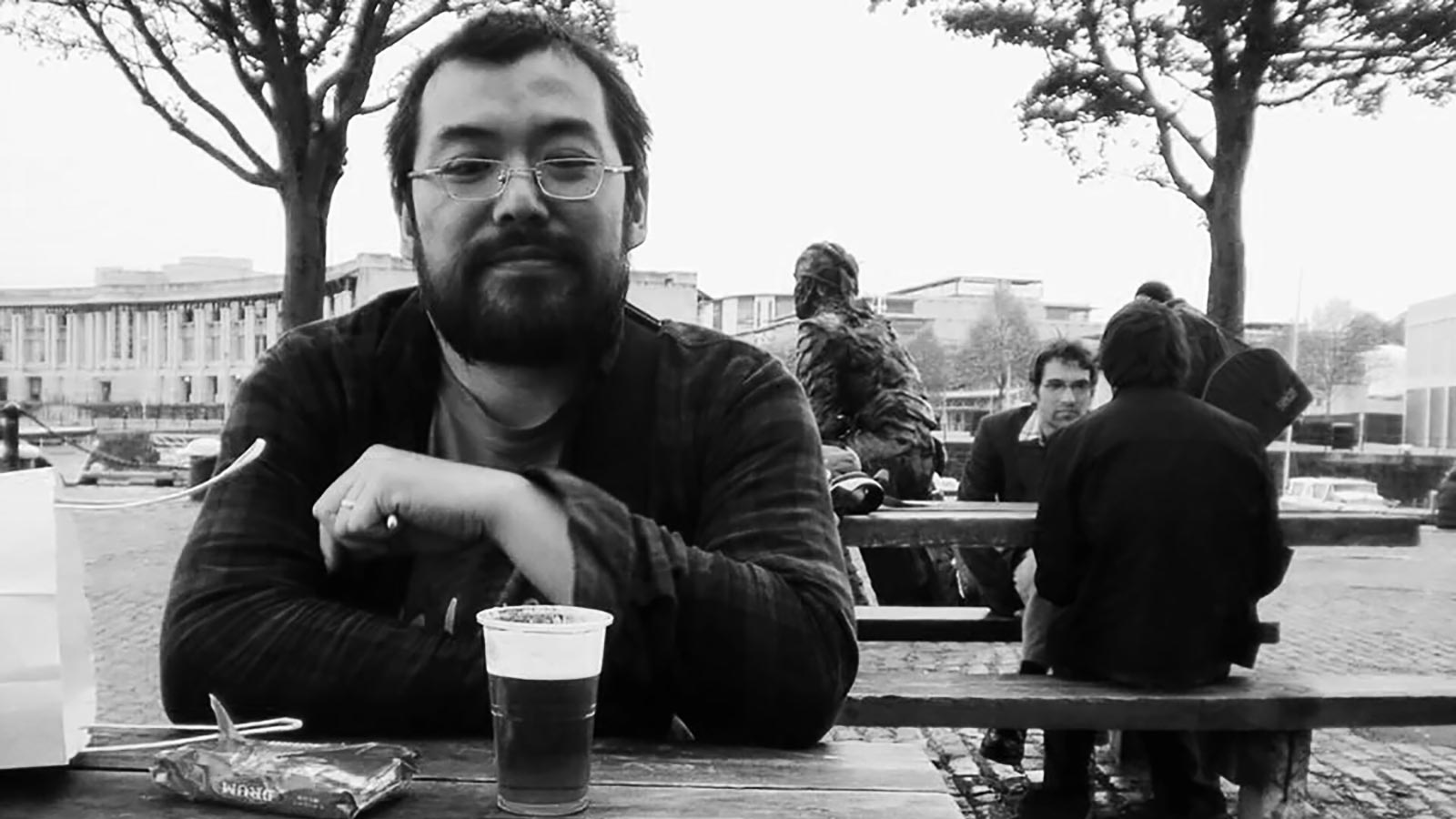 When I first came to Bristol to start writing about the music scene, in February 2015, I knew the city had made an international name for itself. What I discovered quickly though, going through the bands’ archives and memorabilia, was that one city, in particular, had a strong love for the Bristol Sound: Tokyo.

The love was reciprocal. And one of the most special of all the Bristol lovers in Japan was the record shop owner, writer and DJ Naoki Iijima, of Disc Shop Zero in Tokyo. Unfortunately, after becoming suddenly extremely ill in November, Naoki, 48, passed away on 11 February this year.

Now, musicians from Bristol, including Smith & Mighty, Rider Shafique, Andy Jenks, Guy Calhoun, Mark Stewart, Kahn and Neek from the Young Echo Crew, and many more, are raising funds to honour this extraordinary man, who helped music from Bristol arrive in Japan and help his wife Miwako save the shop.

From 1985, the band Chaos UK went to Japan for gigs; and in the mid-1980s the DJ Miles Johnson, of the Wild Bunch fame, had a keen interest for the city and organised a series of events for the collective in 1986.

“I went to Tokyo for the first time in 1985! I was one of the first ones from Bristol to go! Wild Bunch was after us (laugh),” Gabba, from Chaos UK, told me at a fundraising event at Trinity earlier in February. “I went with my punk band Chaos UK to play there. A lot of people would come to our gigs constantly. Just the very first time, we played to about one or two thousand people. Then we became part of the furniture there! We always have a great crowd there. I met Naoki in Tokyo, then when he visited here. He’s always been so good to the Bristol people; in his shop, he had records and even sold some old issues of Venue magazine!”

Naoki Iijima started collecting records from the Bristol music scene in the 80s and wrote about it as a music journalist, and organised music nights with local artists. Becoming a sort of “Fat Paul” of Tokyo… And in 1993, he opened his Disc Shop Zero, which over the years became the biggest archive centre of music from Bristol outside of the UK. He visited the city for the first time in 1994. In 1998, he and his wife even travelled to Bristol for their honeymoon and saw one of the favourite bands, The Moonflowers, at the Thekla. Later on, dubstep crews like Dubkasm – Digistep and DJ Stryda – regularly went to Tokyo for parties and events.

“Naoki was an amiable guy, such a fan of Bristol,” Ray Mighty, from Smith and Mighty, told me. “When I went to Tokyo, I met all his family, so every time I go to Japan, or when he came over to Bristol, I met him and his family at one point. In Tokyo, he and his family always took time to take us out for a meal. What I remember from the shop is this weird feeling: being in the middle of Japan, and seeing all the records from Bristol, all sort of music, not only hip hop, really everything, from punk to all sort of genres, it’s amazing.”

Andy Jenks, from Alpha and The Flies, also went to his record store regularly over the past two decades. “I remember the first time I went to Naoki’s shop, with Rob Smith and Mad Professor. I was there with my band Alpha, promoting an album released by a Japanese label called Toy Factory. We did a little DJ tour and went to a few festivals around Japan. We were in Tokyo and did a few interviews, and then we went to Naoki’s shop to take some photos. It is an amazing place, just like a treasure trove of good music and all Bristol music, finding records we didn’t even know existed! It’s one of the best record shops I’ve ever been to. We also saw him when he came to Bristol and took him to our studio in Christchurch and to the Attic Bar, only a few years ago. Naoki’s passion and his knowledge of bass music were infectious.”

Disc Shop Zero has its walls covered with posters from the Bristol bands, like More Rockers, Flynn & Flora, Massive Attack, and copies of Banksy’s art. But the shop also always had its pulse on Bristol’s new music and the underground scene. That’s how it started, Naoki and his wife Miwako collecting records from punk bands and early hip hop crews, later on discovering like Young Echo and Dub From Atlantis in the 2010s.

Kahn, from Young Echo, aka Joe McGann remembers: “I’ve been to Tokyo once, in 2015, only once for now but I would love to go back. I remember it was really busy; I went there touring with Neek, and we had a lot of dates. We stayed at Naoki’s house in Tokyo, and he was so welcoming. I had met him in 2011 or 12 when he was in Bristol, and he used to come to London to see Young Echo play, in Shoreditch; that was a really great night with him.

Naoki has always been so supportive everything Young Echo has been involved in and every artist from Bristol, especially all the culture around dub and grime music. He just loved Bristol and tuned in to our shows online, so we always gave him a shout out. He was just such a great person.”

In 2015, Naoki also co-founded the label BS0, which was dedicated to “the spirit of Bristolians and music from Bristol”.

Now his Bristol friends have set up a Facebook page, to raise funds for Naoki, supported by the Save Bristol Nightlife campaign.

“We are so sad that everything happened so quickly and we couldn’t get there in time to give you our message of love and blessings,” the page wrote on their wall on 11 February, “but we know you feel the love and that you will rest in blessed peace. You were someone very special, and we love you and thank you for your friendship and dedication to the music. Nobody knows and understands our music like you. We send love and sympathy to all Naoki’s friends and family and especially the girls and his beloved wife, Miwako.”

A special tribute compilation of music by Bristol-based artists Naoki championed during his lifetime is in the making, with all the proceeds from the record going directly to his family.

Some of the tribute releases for Naoki:

Hidden away in a desktop file named ‘father’ in a studio overlooking the Adriatic sea, there was a lost, forgotten… END_OF_DOCUMENT_TOKEN_TO_BE_REPLACED

Brooklyn rapper Your Old Droog is replacing cultural figures at a rapid rate of knots in the shape of projects,… END_OF_DOCUMENT_TOKEN_TO_BE_REPLACED